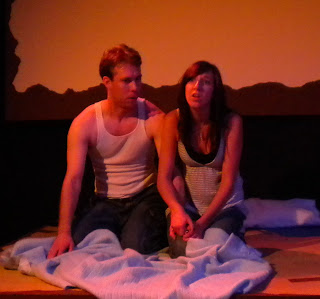 Considering all the publicity that’s being generated around digital 3D movies, such as Disney-Pixar’s Up, it may be helpful to note that there is substantial entertainment available in the world of 1D, as in one-dimensional characters.

Of course, paper-thin people can be a fatal flaw in serious drama. But when the playwright manages her stick figures adroitly, as Melanie Marnich does in Quake (now at convergence-continuum), the results can be amusing and at times even edifying.

Lucy is a naïve 20-something who is desperately seeking “the big love” (not to be confused with this theater company’s next offering, titled Big Love, which is not to be mistaken for the HBO series of the same name). So she starts traveling around the country, walking up to strange men and hitting on them with a mixture of innocence and foolishly high expectations that is both endearing and slightly obnoxious.

As for the objects of her ardor, they are testosterone fall guys who appear promising at first but soon curdle. One is an outdoorsman who “lets himself go” before Lucy’s eyes, losing his hair and adding a paunch. Another is a pleasant student who is seeing another woman on the side. Even though these dudes are dolts, we are never clued in to what kind of a catch Lucy herself might be. Hey, this is her story, get over it.

As the disappointments accumulate, Lucy starts dreaming about a female serial killer in the news who seems to be everything Lucy wants in herself: brilliant, fierce, and always on the move. That Woman, as the killer is known, spouts geological and astrophysical jibber-jabber as she cuts her own swath through the American male populous.

This all feels like a good-spirited feminist rant, written by a woman who has plenty of poetry coursing through her veins. At one point, feeling lonely, Lucy says “I turned myself into paper, folded myself into a boat, and sailed away.”

In addition to some sparkling language, playwright Marnich simplifies her task by reducing Lucy and the men in her life to nothing more than theatrical Tweets. Whether it’s the jock (single-minded and dumb), the new age guru (artificial and dumb) or the shrink (just dumb), everyone is unrealistically uncomplicated. And that helps the play hammer home its overall message about the frustrating search for connection on our life journeys.

Under the inventive direction of Arthur Grothe, the play is staged with crisp efficiency, although convergence-continuum probably should reevaluate its obsession with including video segments in virtually all their productions. The video bits here are remarkably extraneous and ultimately distracting.

Most of the talented cast handles their simplistic characters with flair. Erin Scerbak is wide-eyed as Lucy, although a number of her line readings come across as unintentionally flat rather than as intentionally banal. Christian Prentice scores in multiple roles, particularly as the crazed jock-cyclist and in an all-too-brief bit as a flight attendant. Stuart Hoffman and Robert Hawkes also deliver sharp cameos in their various guises, with Hoffman’s oft-wounded gas station clerk and Hawkes’ dotty psychiatrist being particularly engaging.

But the play, for all its charm, goes a bit off the track near the end of its 80-minute playing time. When Lucy encounters a physically abusive auto repairman, played by Tom Kondilas, this serious subject is treated with the same cavalier detachment as all the others. And it doesn’t feel like a good fit.

Perhaps the most magnetic performance is turned in by Laurel Johnson as That Woman, strutting with sleek and polished confidence through Lucy’s dream sequences as the role model from hell. In her last scene, That Woman transforms herself in a most unexpected way. Unfortunately, Johnson and director Grothe overplay this moment when a quieter, more subdued approach would have been far more incisive.

Still, there is a glittering collection of interesting scenes here, all infused with witty wordplay. And it offers an excellent summation of the search for true love: “Perfect love is possible. It just depends on how many flaws you can put up with.”