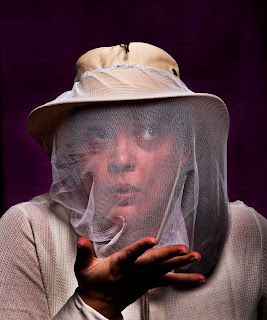 (Beth Wood, as a member of the Earth Plays ensemble who is perhaps contemplating a falling sky.)

Back in 1972, Dobama Theatre mounted a musical revue called Mother Earth, which earnestly sought to alert people, through songs and skits, to the damage being done to our home planet. Indeed, the composer and lyricist of the revue, Ron Thronson, planted an ominous thought in the program notes. He said, “The future of man on the face of this Earth will be determined by our actions in the next five or ten years.”

Well, the decade Thronson referenced blew past us 30 years ago and, considering everything, he may have been right. We may indeed be screwed. Still, even back then his show was criticized for being simplistic and stale. One wag left his opinion on the wall of a stall in the Dobama men’s room, noting succinctly that “There is no gravity, Mother Earth sucks.”

The fact is, it’s hard telling people “inconvenient truths,” even when you’re trying to accomplish it with humor, drama and grace. Most people reject being lectured to in a theater, as they should.

Which brings us to a new version of the old anti-pollution message in Earth Plays (Part Two of the Elements Cycle) at Cleveland Public Theatre.  This assemblage of short pieces, conceived and directed by nine people and then further developed by nineteen cast members, addresses different aspects of our clusterfucked environment.

This is part two of CPT’s Elements Cycle, which began last month with the stunning Water Ways and will continue in the future.  While not as consistently enthralling as Water Ways, Earth Plays offers a number of memorable moments and only goes theatrically awry when it insists on delivering its worthwhile messages wrapped around a rock and repeatedly thumped on the audience’s head.

The parts that work are small gems: Chris Seibert mulling her relationship with her earth mothers in one small room (in a scene she created and directed), and Val Kozlenko as a sperm donor/biologist who explains theories and talks to tennis balls in another isolated space (conceived and directed by Jeremy Paul).

The rest of the action in this 2½ hour adventure happens in the spacious Gordon Square Theatre, where the large cast can stretch out and develop some interesting dynamics ranging from the literal to the surreal. These include a ballet of blue plastic bags that look like protozoa sliding and twitching under a microscope.

When the movements are big and the mosquito-netted ensemble is fully engaged, moving and at times softly chanting, Earth Plays is often transfixing. Unfortunately, several of the scenes featuring dialogue are hampered by poor projection by some actors and challenging acoustics.

An attempt to alter this space by having the audience move around and reseat itself in different configurations during Act One is a valiant effort. And this cast-aided choreography, as they usher the unsuspecting patrons hither and yon, is impressive. But it often just amounts to a group exercise that doesn’t substantially enhance the proceedings.

Audience activity aside, what works best in this production is the physicality of the performers who dance and move with purpose and elegance. But some of the parodies are lame and dated, such as a trio combining Smokey the Bear, the crying Indian from the old PSA on TV, and easy-target do-gooder Bono.

If you’re a pessimist about the environment at this day and time, you’re not alone and your darkest views are represented in CPT’s work. Many heads will be nodding in agreement as the company, under the smoothly-calibrated overall direction of Raymond Bobgan, pokes holes in our complacency about the environment.

Trouble is, that complacency has long since been eroded. And one wonders how activist, issue-oriented theater needs to fashion itself for the 21st century. It ain’t 1972 anymore and it may be too late for many things—including earnest skits, soft chants and interesting dances.

Posted by Christine Howey at 11:40 AM