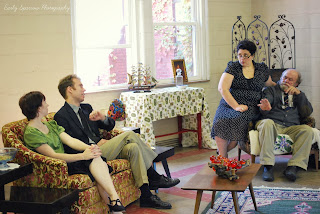 A sensible person might ask why a critic would review a play after its performance schedule has been completed. Such is the case with The Bald Soprano, which closed its brief two-week run last night.  After all, what’s the point of a review when no one can respond to a favorable notice by buying tickets?

The answer, of course, is that local theaters, especially new ones such as OCTP, need more than ticket sales. They need financial support. And since we appear to be between government shutdowns for the time being, this would be a fine time to consider a donation to OCTP.

The Bald Soprano by Eugene Ionesco is a marvelous example of the theater of the absurd, as two couples, a maid and a fire chief (!) trade non sequiturs (no, make that anti-sequiturs) as they inch their way through another deplorably banal day.

The often hilarious production, directed by Sarah Greywitt, was performed with exquisite timing, down to the smallest tongue-clicks and head turns. Robert Hawkes and Christine McBurney were especially delicious as Mr. and Mrs. Smith, a married pair who alternately vex and delight each other for no apparent reason. And for every reason in the world.

They are visited by dinner guests the Martins, played with wide-eyed innocence and a complete lack of short (or long) term memory by Stuart Hoffman and Courtney Nicole Auman. Cassie Neumann as Mary the maid and Benjamin Gregg as the Fire Chief, also contributed sharp miniature characterizations.

As performed, it was a nonsensical parody of the way we converse, set against a rather grisly landscape of pointless human existence. In other words, it was rather sublime.

This is a theater group that clearly deserve support. With luck, they might even decide to explore more of the absurdist genre. In any case, put them on your play-dar (radar for theater buffs), maybe send a check, and keep an eye out for their next production.

Ohio City Theatre Project
Connect with OCTP at www.ohiocitytheatreproject.com
Posted by Christine Howey at 10:55 AM