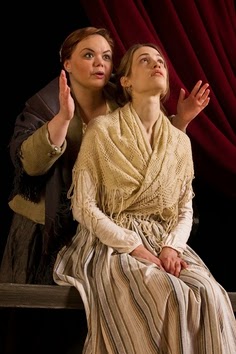 Back when Roe v. Wade was decided in 1973, we all thought the issue of abortion rights had been settled for all time. After all, it made perfect sense, to many of us, that women should have control over the medical decisions that affected their own bodies.

Well, little did we know that those rights would be steadily eroded in the ensuing decades, with national and state legislatures proposing literally thousands of laws in the past few years restricting the right of women to determine the course of their own pregnancies and the ability to have access to the medical care they need.

The battle for women’s rights, on all fronts, is compelling subject matter for documentaries, speeches, and any number of Rachel Maddow shows. It also can be fertile ground for theater, but only when the politics are woven into a story and not a screed.

This is the juncture where the world premiere of Ancestra, now at Cleveland Public Theatre, becomes a bit problematic. On the plus side, the production directed by Holly Holisinger (who is also one of the four co-authors) is well performed by the ten-person all female cast, most of whom handle multiple roles. The show is further enhanced by Aaron Benson’s handsome scenic design, original music, and a lobby installation that seems like a 19th century version of Judy Chicago’s “The Dinner Party” (minus the vulva-inspired dishes). This all serves to neatly integrate a story that flashes back and forth in time from the mid-1800s to the present day.

There is a strong local connection to this play written by current Clevelanders Holsinger, Chris Seibert (who plays the central role of Cora), Renee Schilling and Sally Groth (who plays multiple roles). Nearby Oberlin College is front and center, since it was the first college to allow women to study with men, in 1837. One alumna, the magnetic Lucy Stone, becomes a mover and shaker in the early women’s rights movement, along with Antoinette Brown (Lauren Joy Fraley).

The history of women’s struggle for autonomy is represented by several women, Stone and Brown included, who participate in the National Women’s Rights Convention held in Cleveland eight years before the Civil War. This annual series of meetings was aimed at raising the visibility of women’s concerns, a groundbreaking concept at the time.

There are a lot of personalities and history to cover there, but that’s just half the task this production sets for itself. In present time, muckraking journalist Cora is dong her edgy blog thing until she is wooed and hired by Irene (Tanera Hutz), a media company executive who wants a “fearless trailblazer” on staff. “We welcome your voice,” says Irene.

Having a voice is key for these playwrights, since women have always been muffled, muted or ignored when they tried to express themselves. And the play certainly touches a lot of bases as it finds contemporary parallels to the repressive world of the 19th century. To wit: an old-school teacher advises her female college students to hurry up and “win yourself a husband.” Of course, that’s the exact same advice being peddled now by the “Princeton Mom” Susan Patton, all over the media.

Unfortunately, the story of Cora and her disappointing journey through the wilds of corporate media feels remarkably naïve, since Cora seems unable to handle her editor’s fairly reasonable demand for a balanced article on birth control clinics. And then, Cora plummets into a psychological death spiral when she reads some nasty comments about herself on the Internet. Wait—an experienced journalist actually reads the anonymous, threatening, crazy-clown comments on the Internet and takes them to heart? Really?

As for the women who fought for rights more than 150 years ago, they appear mostly as ghostly apparitions murmuring about this and that. In the brief moments when we actually encounter one of these women such as Stone (played with sparkplug intensity by Katy Lynn Patterson, who also is a stitch as a cop). And then, we actually become involved. The same pleasant rush happens in present time when Cora’s traditional-values sister Marian (well played by Faye Hargate) and their mom Jan (the ever-in-the-moment Anne McEvoy) react to Cora’s abortion politics and then her firing.

There’s plenty of righteous anger in Ancestra, and that’s a damn fine thing.  However, the play often sounds like compendium of Wikipedia entries, spewing a litany of anti-woman issues only occasionally tethering them to personal stories and felt consequences. You can feel the authors straining to impart just one more telling factoid, one more truth, one more lesson. And that becomes wearying after two hours.

I’m sure the playwrights cut a substantial amount of material in crafting this piece. But when there is more than one playwright in the mix, the editing can never be as brutal as it needs to be, otherwise feelings might be hurt. This is why so many devised plays written by multiple people tend to be overstuffed grab bags of thoughts. And that’s why they’re usually short on the real character development and plot trajectory that fuels truly transformative theater.

Posted by Christine Howey at 12:49 PM