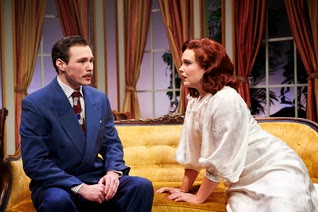 (Alec Hynes as Dexter and Kathryn Metzger as Tracy Lord)

If you’re a lover of chocolate or coconut cream pie, you’re keenly aware that an upper crust is not only unnecessary but something of a blight on an otherwise tasty treat.

Some might say the same thing about the upper crust in society, that amalgam of 1 percenters who live off inherited wealth and swan gracefully from drawing room to sitting room all day long. These are the folks who populate The Philadelphia Story by Philip Barry, and happily this upper crust doesn’t turn soggy under the sharp direction of Jerrold Scott (who also doubles amusingly as Uncle Willie).

This 1939 play, which was famously adapted for Hollywood, combines sophisticated and screwball comedy to a fare-thee-well. And Barry is a master of the rat-a-tat, knife-edge dialogue that fueled so many comedies of that era.

Of course, the set-up is custom-tailored for laughs. The arrogant and feisty heiress Tracy Lord, who is anticipating her marriage the next day to stuffy George Kitteredge, is suddenly confronted by both her suave ex-husband Dexter and a sly reporter, Macauley. Soon, Tracy’s well-cosseted hormones are flying in all directions and it’s unclear where they’ll eventually perch.

The witticisms come at you fast and furious, but they usually reward careful listening. As when George says: “But a man expects his wife to—“ and Tracy completes the sentence: “Behave herself. Naturally.” To which Dexter appends, “To behave herself naturally.” That little pause, or lack thereof, makes all the difference.

The cast, made up primarily of CWRU students, handles this precious wordplay well. The rapid delivery feels a bit forced in the first act, but once the performers get their feet under them, their pace begins to fit the script quite nicely.

In the linchpin role of Tracy, Kathryn Metzger has both the arch rectitude and the sliver of anarchic spirit that Katherine Hepburn displayed on stage and screen. As Macauley, Jeremiah Clapp has the lean look of a young Fred Astaire (minus the fancy footwork), as he pursues Tracy. And Alec Hynes lends some Cary Grant-style suavity to Dexter, smoothly circling the comical chaos and planting tender memories until he’s ready to make his move.

It’s a shame the theatrical versions of this show don’t include the famous prelude to the film—Tracy breaking Dexter’s golf club over her knee, Dexter responding by pushing her down with his open hand to her face. Sure, it ain’t PC, but boy is it funny.

However, thanks to Cameron Caley Michalak’s lush set and Jeffery Van Curtis’ tasteful costumes, the play looks as good as it sounds. And thanks to Barry’s clever words (”I would sell my grandmother for a drink, and you know how much I love my grandmother”), this Philadelphia Story is a yarn worth hearing again.

Posted by Christine Howey at 10:23 AM