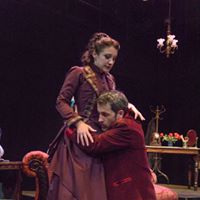 (Anjanette Hall as Nora and Abraham Adams as Thorwald)

Great theater often comes alive in the details, and there are gorgeous details aplenty in the outstanding production of A Doll’s House now at Mamai Theatre Company. This talented troupe has taken an adaptation by Thornton Wilder of the Henrik Ibsen script and turned that old Norwegian play into a fresh and compelling look at a restless and unfulfilled woman in a confining marriage.

But, oh, the details! Take the line “I can’t spend the night in a strange man’s house.” Those words are uttered by Nora, later in the play, when she decides to leave her husband of eight years, Thorwald, much to his surprise. And it sums up, in an instant, the profound disconnection between these two remarkable characters.

In this production, those two characters are given precisely crafted interpretations by Anjanette Hall as Nora and Abraham Adams as Thorwald. Hall’s role has a sweeping trajectory—from childlike “doll” to a self-realized young woman—and Hall brings each aspect of this woman to life with the exactitude of a pointillist. And Adams provides an equally fascinating portrayal of a man who is often rendered as a two-dimensional dufus. Indeed, there are often times when you feel great affection for Adams’ Thorwald, which makes the play resonate even more powerfully.

They are supported in splendid style by four other players. Rachel Lee Kolis is beaten but unbowed as Christina Linden, Nora’s less fortunate gal pal. She shares secrets with Nils Krogstad (a determined yet vulnerable John Busser), a functionary in the bank run by Thorwald. And Tim Keo makes the most of his turn as Dr. Rank. In his scene with Nora, when she entices him with her silk stockings, you can feel the tension ripple through his yearning and unmoving body. Like I said: details.

Director Christine McBurney has found exactly the right pace for this material, and it grabs hold of you from the first lines all the way to the end, some 2½ hours later.  The design team has also done exceptional work, from the multi-level scenic design by Don McBride to the subtle lighting design by Marcus Dana. Kristine Davies’ period costumes are spot-on, and equally effective are Richard Ingraham’s sound cues, capturing party sounds from a floor above, and Monica Plunkett’s specific and appropriate props.

A Doll’s House created a furor back in the day, with a wife and mother willing to forsake her duty to husband and children to assert her own individuality. It’s an early sketch of the feminist mindset, and it is given a stellar production by Mamai that is hugely satisfying from the smallest details to the largest themes.