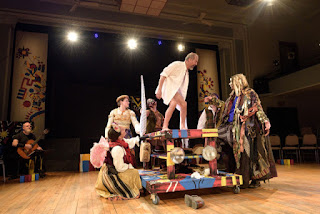 There are many ways to tell a story, ways that extend far beyond the usual scripted dialogue and blocking that you find in most theaters.

For the past 25 years, the folks at the New World Performance Lab have been exploring those off-the-beaten-path ways of storytelling. And now, in their production of Don Quijote, many of those pathways are on full and delightful display.

This is a bilingual adaptation based on a version by Patricia Suarez, but the stories are easy to follow for anyone willing to plug into their childlike spirit and experience a visceral performance that is both engrossing and amusing. The story of Don Quixote (our English spelling) is familiar to most of us, thanks to The Man of La Mancha and many other renditions. Those stories have inspired many of us to tilt at our own personal windmills from time to time, even though failure was almost assured.

The things that draw us to this story of the “knight of the woeful countenance,” the man with a pure heart and an indomitable spirit, are energetically portrayed on NWPL’s arena stage, occupied by six talented performers and one guitarist (Adam Keeler). As the director James Slowiak states in his program notes, it is a story of theater and lunacy, of clowns and caballeros, of life and death.

The different stages of DQ’s story unfold at a brisk pace, with the actors only a couple feet away from the audience. And all the emotions are worn on everyone’s sleeves—the boundless joy when Don connects with people, the sadness when they remove Don’s books in order to make him “sane,” and the victory he achieves even in death.

The cast is led by Jairo Cuesta in the title role, and he has a magnetic presence on stage, making even the smallest poses and gestures feel suffused with meaning. As he proceeds on his adventures, he is accompanied by the other performers who employ dance, song, mime, masks, and fart jokes. Plus, there’s a rolling platform with shelves that carries colorful costumes (designed by Inda Blatch-Geib and Dred Geib) and props that are employed at a moment’s notice.

Members of the ensemble include Jamie Hale as Don’s faithful sidekick Sancho Panze, and Justin Hale as several riveting characters including Death. Debora Totti is concise and specific in all her character iterations, including a most demonstrative monkey.  Also on the animal front, Chris Buck fashions a quite believable horse, without any exotic WarHorse-style accoutrements, while Rosilyn Jentner contributes a number of other compelling characters.

In short, this 90-minute production, which is an encore presentation by the NWPL, demonstrates flashes of multiple theatrical traditions, living up to the Lab part of their name. But this is a Lab that you’ll be happy to spend some time in, accompanied by original Spanish songs arranged for guitar by James Marron.

So if you’re a Clevelander who doesn’t stray far from the home turf when considering a night out, give your GPS a new challenge and take a seat in the Lab. It may help you make your own kind of discovery.

Posted by Christine Howey at 10:50 AM