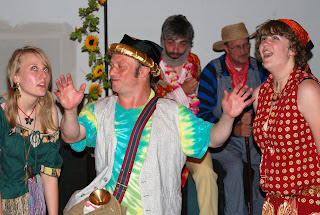 There’s a saying that “time heals all wounds,” along with its comic corollary “time wounds all heels.” Both would seem to be true in the romantic The Winter's Tale, that combines tragedy and silliness while spanning a couple decades until a happy ending is earned for all.

In some Shakespeare plays, you have to work your way up to climactic moments and profound emotions. But in this somewhat haphazard work, now being shown around town for free by the Cleveland Shakespeare Festival, the heavy stuff is mostly front-loaded. The CleveShakes company handles the significant challenges posed by this play with dexterity, although there are blips in an otherwise smooth production.

Early on, King Leontes gets his Sicilian panties in a bunch because he thinks King Polixenes of Bohemia is boffing Leontes’ wife Hermione. True to the playbook for paranoid and jealous husbands everywhere, Leon won’t listen to reason or even an oracle who gives everyone a pass. So Leontes puts Hermione on trial and she’s sent to jail, pregnant with what Leontes thinks is the other king’s child.

The king and queen of Sicilia are well served by Camillo (Steven Madden), a nobleman who refuses to poison Polixenes when Leontes orders it, and Paulina (a sharp and stalwart Reagan Kendrick), the fierce friend of Hermione through thick and thin.

As Leontes, Aaron Elersich has a nice brooding look and, dressed in contemporary garb, he has the lean and brooding appearance of Jerry Orbach during his Law & Order phase. But Elersich’s line readings, often either forced or flat, aren’t able to bring dimension to the depths of his character’s free-range nihilism. In the smaller role of Polixenes, Eric Perusek is strong and Cassie Neumann makes Hermione a sympathetic figure, right up to her apparent death.

Meanwhile, the child Hermione bore, named Perdita, has been rescued from a Leontes-ordered death by a kindly shepherd (played with masterly aplomb and lovely vocal precision by Larry Seman) and Clown, his son. (Here’s a tip: If you decide to name your son Clown, chances are he will turn out to be a buffoon, but probably not nearly as funny as Nathan Miller’s version.)

Of course, as our old buddy Will is famous for, there are more confusions in store and sure enough, after that aforementioned passage of time, Perdita (Liz Jones) and Polixenes’ son Florizel (Jack Matuszewski) fall in love. This all happens in fantastical Bohemia, where a cutpurse named Autolycus (Allen Branstein in full and frenzied wack-a-doodle mode) keeps the audience laughing.

This is the cue for the magic to take hold, as Leontes reunites with his kid and Hermione turns from a memorial statue back into herself, reuniting with a chastened Leontes. Director Tyson Douglas Rand pumps up the comedy, which works nicely, but the two halves of this oddly constructed play never quite jell.

But it’s still a damn fine way to spend a summer evening.

The Winter’s Tale
Through August 2 at various
outdoor locations, see their
Web site for details: www.cleveshakes.org
Posted by Christine Howey at 3:57 PM No comments: 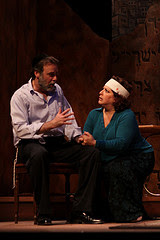 (Charles Kartali as Shmuel and Jean Zarzour as Amalia)

You don’t have to be steeped in the politics of the West Bank or the passion of the religious Zionists who call it home in order to understand and appreciate Pangs of the Messiah. But, as they say, it couldn’t hurt.

Placed just slightly in the future, this challenging work by playwright Motti Lerner (an activist in the Israeli peace movement) explores the human toll imposed by political and religious struggles. Although very talky and at times unnecessarily intricate, Lerner crafts many impressive scenes. And a stellar cast under the direction of Scott Plate delivers a powerful evening of theater.

Set in the West Bank home of Rabbi Shmuel Berger, the play pits him and his Orthodox family against his own government, which is on the brink of signing a U.S.-sponsored treaty that will destroy their patch of homeland in trade for peace with a recognized Palestine. If this sounds a bit close to possible reality, you’d be right, and that gives this production added heft.

But what stands out most are the characters Lerner fashions, and how they are brought to life in this production. Shmuel and his wife Amalia welcome home their grown son Avner and his wife Tirtzah from a trip to America. That’s where Avner and Tirtzah failed to sway the administration or the U.N. to help secure the West Bank for Jewish settlers.

Once they’re back home, tensions escalate quickly, and not just on the political front. Avner and Tirtzah have been trying unsuccessfully to have a baby, and that undercurrent roils the waters as Avner becomes progressively more militant—even abandoning his suit and tie for an Uzi.

The Bergers have two other children including Chava (Amy Pawlukiewicz), a pregnant mother who is trying to keep track of her loose-cannon husband Benny (Ryan Jagru), and a younger mentally handicapped son, Nadav, who is constructing a house in the area.

Events ratchet up, expressed in brief newscasts that interrupt the family dynamics from time to time, along with visits from family friend and political player Menachem (Neal Poole). Thus, the stress fractures of the family—and symbolically of Israel itself—are shown in stark relief.

Charles Kartali is strong and compassionate as Shmuel, and he makes his political stand understandable without resorting to invective. In the role of his wife Amalia, Jean Zarzour is equally powerful as his main support and loving companion. Although registering as perhaps a bit old for the part, Mark Mayo handles his duties as Avner with quiet purposefulness. His scenes (both loving and contentious) with his wife, played with sharp intensity by Karen Sabo, are genuine.

One of the best moments, however, involves Shmuel and Nadav as they discuss, in their way, the tensions surrounding the family. Ethan Rosenfeld is captivating as the challenged Nadav, displaying childlike eagerness as well as a shallow grasp of more complicated facts. Even though it’s hard to picture this Nadav building a house and managing an assistant, as the script claims, his simple innocence provides a profound sounding board for the world-shattering events taking place.

Even though the title Pangs of the Messiah has the ring of a religious screed, it is much more about the human price that is paid when zealotry and compromise clash. And that is a lesson we all need to learn.

Note: Sadly, this is the last theatrical production to be sponsored by the JCC. And once again, the theater herd in Cleveland is thinned, to the detriment of everyone. Shiva starts July 2.

Pangs of the Messiah
Through July 1, presented by the Mandel
Jewish Community Center, at the Brooks
Theatre, the Cleveland Play House,
8500 Euclid Avenue, 866-546-1358
http://www.clevejcc.org/PangsOfTheMessiah.asp

Posted by Christine Howey at 11:51 AM No comments:

A Funny Thing Happened on the Way to the Forum, Porthouse Theatre 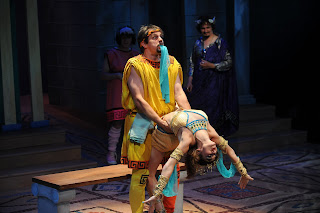 (NIck Koesters as Pseudolus has his hands full with courtesan Panacea, played by Linda Mementowski.)


Is a “burlesque” show all rubber chickens and pratfalls? Hardly. The dicey trick with fast-paced farces such as A Funny Thing Happened on the Way to the Forum is that the director and actors have to balance manic wackiness with the discipline of staying on script and on point.

In this production at Porthouse Theatre, directed by musical theater maven Terri Kent, the company hits many fine notes, both musical and comedic. But some of the players don’t stretch quite far enough within their characters and, as a result, the laughter they generate is not as rich and satisfying as it might be.

This 1962 Broadway hit has always been popular, since it features a tender love story immersed in the lusty and lascivious atmosphere of ancient Rome, replete with mistaken identities, mistaken edifices and over-the-top characters. A send-up on the farces of Plautus, this musical features a sneaky-brilliant score by Stephen Sondheim and a hilarious book by Burt Shevelove and Larry Gelbart.

Even so, this vaudeville-style work needs a handful of actors who can create individuals we can bond with and believe in. Otherwise, all their crazy antics come across more as mildly amusing calisthenics rather than absurd character-driven inevitabilities.

In brief, the slave Pseudolus is trying to win his freedom by helping his master, young Hero, hook up with a virginal (!) courtesan next door named Philia. Of course, the path to true love has many obstacles, including the fact that she has been purchased, sight unseen, by the gallant warrior Miles Gloriosus (an imposing Brian Keith Johnson). Then, Hero’s father Senex arrives and is mistaken by Philia to be her intended master, much to Senex’s libidinous delight (as he notes, he's eager "to sow my one final oat").

Everything gets even more complicated from there, as a gaggle of prostitutes, cringing slaves and eunuchs, and Senex’s harridan wife Domina (Melissa Owens in a Marge Simpson wig and continual harpy dudgeon) all stir the pot to a boil.

In the lead role of Pseudolus, Nick Koesters employs razor-sharp comic timing and a more-than-passable singing voice, finding many laughs in his portrayal of this sly, conniving servant. But Koesters is so polished and confident on stage, his Pseudolus lacks the vulnerable center that drives this drudge to yearn for freedom—a vulnerability that, incidentally, would motivate the audience root for him.

Sarah Roussos brings a grand set of pipes to her songs as Philia, although she doesn’t have enough fun with her character’s intellectual shortcomings, failing to draw all the humor out of her solo “That’ll Show Him.” Her heartthrob Hero is handled well by Brian Duncan, turning in a lovely rendition of “Love, I Hear.”

As Hysterium, the nervous slave of Senex, J.P Makowski quivers incessantly but doesn’t fully explore the sweeter aspects of the role. In a similar manner, Benjamin Czarnota renders the procurer Marcus Lycus with little more than a low-grade sneer, when a more oily and sleazy attitude would be more amusing.

For guidance in how to handle such roles, look no farther than Marc Moritz, who makes Senex a splendidly dirty old man while still seeming adorable and even cuddly. His crooning of “Everyone Ought to Have a Maid,” along with his two slaves and neighbor Lycus, is a highlight of the show. As are the two eunuchs, played by Danny Lindenberger and Dane Castle, who primp, flirt and steal scenes to which they have no legal claim.

A nod of appreciation also goes to musical director Jonathan Swoboda who chose to keep “Pretty Little Picture,” an incidental song that is often cut but which, in this production, has a charm all its own.

In sum, this Funny Thing is plenty funny, it just falls short of being the total romp it might be.

A Funny Thing Happened on the Way to the Forum
Through June 27 at the Porthouse Theatre,
Blossom Music Center, 1145 W. Steels Corners Road,
Cuyahoga Falls, 330-672-3884
Posted by Christine Howey at 12:03 PM No comments: