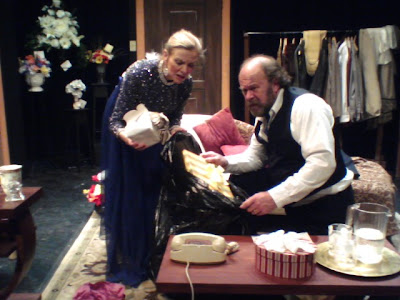 There’s a certain attraction to being let in on what happens behind the scenes, whether the subject is Hollywood (The Player), real estate sales (Glengarry, Glen Ross), or professional theater. The cloistered world of the latter is addressed in Scenery, a production intended to raise funds for the Cleveland Shakespeare Festival, which is now being performed at the Cleveland Play House.

If you enjoy turning yourself over to a couple excellent actors who know a little something about comic timing, you should bundle up, start your poor frozen vehicle, and treat yourself to an entirely likeable couple of hours.

The play by Ed Dixon, a veteran actor on Broadway and elsewhere (he played Matthew Harrison Brady in the fine Play House production of Inherit the Wind in 2009), drops us into the dressing room of the Crains, Richard and Marion, who are experienced thespians in the third act of their careers. They are opening something called “The Anniversary Wake” at the Belasco Theatre in New York City, a play they consider pure tripe but which will allow them to pay some bills.

Dixon uses his background to explore the inner workings of actors before, during intermission and after their performance. In addition to revealing some of the superstitions that abound in theater dressing rooms (no mention of Macbeth without a cleansing spin-spit-“fuck!” ritual), we learn that the Crains have a fairly dicey personal relationship.

They each share a fondness for male sexual companionship and, while Richard and Marion haven’t had sex with each other for eight years, they still clearly love each other. This comes through even as they argue and bicker with each other, occasionally joining forces to dump on the lowest of the low (critics and audience members who open candy wrappers during a performance).

As Marion and Richard, Anne McEvoy and Robert Hawkes conjure a believable, semi-platonic chemistry while delivering Dixon’s punch lines with off-handed dexterity. McEvoy is both aggravating and sympathetic as she battles with her self-image as an aging actor. Playing gay Richard with remarkable restraint, Hawkes avoids obvious limp-wristed characterizations but, at the same time, sacrifices some fey fun he might have had with this juicy role.

Director Tyson Douglas Rand keeps the two-acts moving briskly, even through a forced conclusion that threatens to throw it all off the tracks. But these two proven performers stick the landing, and it is hoped many people brave the elements to enjoy this charming inside-theater treat.

Posted by Christine Howey at 11:58 AM No comments: 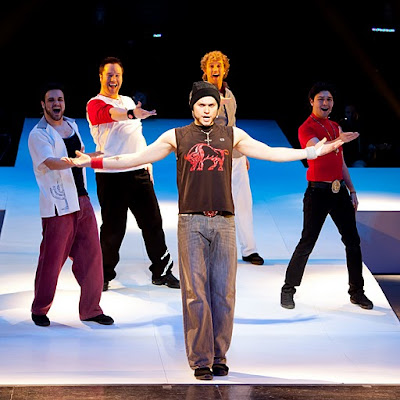 There aren’t many cottage industries in professional theater, but it seems that Josh Rhett Noble has a pretty good thing going with Altar Boyz, now playing the Hanna Theatre at PlayhouseSquare. After playing lead singer Matthew at Beck Center a couple years ago, and at TrueNorth Theatre last autumn, here he goes again.

It’s all about five guys in a Christian rock band who talk their way through a concert as they try to save all the souls in attendance. This process is tallied by the Sony Soul Sensor, a pile of electronics that can detect when a soul has been cleansed of its various flaws and defects. (Perhaps they can ship it over to Fox News once the show is over.)

This production on the Great Lakes Theater Festival stage is essentially a redo of the former Beck production, with four of the five cast members and most of the production people reprising their work. And that’s not such a bad thing, since this energetic romp directed by Scott Spence is a feel-good 90 minutes. It also works because it praises the Lord without being nasty or divisive; it’s welcoming for just about anyone.

The band is a motley crew, with the pretty straight (in all ways) Matthew joined by fey Mark (an adorable Matthew Ryan Thompson), streetwise punk Luke (Dan Grgic), the Latino Juan (Ryan Jagru), and their Jewish lyricist Abraham (Connor O’Brien). The Boyz attack the songs by Gary Adler and Michael Patrick Walker with unflagging gusto, and have plenty of fun with the sub-storylines in Kevin Del Aguila’s book.

Unfortunately on opening night, there were problems with sound balance so that quite a few of the clever lyrics were swamped by Larry Goodpaster’s band. And the Soul Sensor suffered from digital constipation, at times throwing off the soul countdown.

One must assume those glitches will be fixed, allowing this reborn fab five to sing, rock and jam their way into a very satisfying run.

Posted by Christine Howey at 9:30 AM No comments: 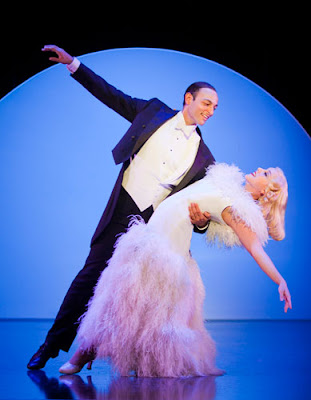 (Matthew LaBanca as Fred and Anna Aimee White as Ginger)


When staging a show of any kind, it’s a good idea to know what your “money shot” is. That’s the moment that everyone has come to see, the scene for which they have the highest expectations. And woe to you if you don’t deliver it.

When the title of your evening is Backwards in High Heels: The Ginger Musical, you have to know that the audience is drooling for a live recreation of the magic Ginger Rogers and Fred Astaire displayed on the ballroom floor. Instead, what this production at the Cleveland Play House provides is a tiresome, cliché-ridden trudge through Ginger’s career, starting at birth (her mother felt her daughter’s toes dancing in the womb!) to Roger’s Oscar for her dramatic role in Kitty Foyle.

Christopher McGovern, who is the author of everything on stage, including four original songs, would have had a middling career in Hollywood about 80 years ago, grinding out minor musicals loaded with stock characters. His dialog is flat, obvious and entirely predictable. Yes, someone actually says “Hollywood’s a mean place and it’s a hard world.” Just in case you hadn’t ever heard that before.

McGovern weaves various old standards into this banal storyline. For instance, Ginger’s multiple marriages are dispensed with in a cutesy version of Irving Berlin’s “Change Partners (and Dance).” Never mind that there might have been some emotional baggage attached to those matrimonial arrivals and departures.

To be frank, Ginger Rogers was a tough, sexy broad who esaayed a brilliant career, but she comes off in this show as a dancing doll with domineering mother issues. Issues that are resolved, as is everything else, with laughable ease.

Played on an essentially bare stage with some flats rolled on for specific scenes, it seems as if the director Scott Schwartz and scenic designer Walt Spangler are setting us up for a glorious surprise. Surely, when Fred and Ginger finally are allowed to dance together, the stage will be transformed into a ballroom dreamscape.

But no, the money shot in this show just turns out to be loose change, as Fred and Ginger dance in their familiar duds, but minus any staging that would transform the moment into something truly memorable. Perhaps this would have been the best time to strike up the tune “Let’s Call the Whole Thing Off.”

As Ginger, Anna Aimee White dances well and sings serviceably, but McGovern’s determinedly hollow libretto never allows her to turn Ginger into a fully dimensional woman. Matthew LaBanca has a bit of the Fred look, but comes nowhere near the genius’s fluid moves and quirky singing voice. Heather Lee, as Ginger’s mother Lela, plays a down-market stage mom who often states facts (“Ginger was willful and headstrong”) that would be better off inferred.

Playing multiple roles, Christianne Tisdale, Benjie Randall and James Patterson are humorous at times, but are only cringe-inducing when they attempt to impersonate Hollywood stars attending one of Ginger’s parties. Where is Rich Little when you need him?

This production, done in partnership with three other theater companies, is making the rounds across the country. At least they’re sharing the pain.

Posted by Christine Howey at 10:39 AM No comments: