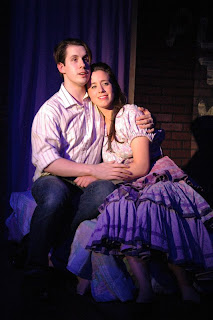 (Jason Leupold as Tony and Kathleen Ferrini as Maria)

It takes guts to stage West Side Story, especially with a huge young cast, since the demands of almost operatic singing and often balletic dancing—let alone acting—are fairly monumental. And then there's just the task of moving almost three dozen people around a stage with limited dimensions.

Big challenges, however, never faze director Fred Sternfeld, who moves large masses of people with the decisive precision of Alaric the Visigoth. And Sternfeld is the major domo of this largely successful production at the TrueNorth Theater in Sheffield Village.

Yes, the Jets and Sharks are once again at each others’ throats as the two star-crossed members of each tribe, Tony and Maria, see each other across a crowded gymnasium floor and fall into Shakespearian (in this case meaning tragic) love.

Along with talented choreographer Bebe Weinberg Katz, Sternfeld maxes out the TrueNorth space, often filling the stage with his entire 30-plus person cast. And at times, such as during the “Somewhere” dream sequence when everyone is on stage and in synch, the results are electrifying.

At other moments, several of the young performers lapse into indicating, their facial calisthenics undercutting the real emotions surging throughout this classic.

The two lead roles are a mixed bag themselves. As Maria, Kathleen Ferrini sings sweetly and has a fresh, honest innocence. Jason Leupold as Tony works hard to act his songs, and often succeeds, but his emotions at other times feel more manufactured than genuine.

The two leaders of the gangs, however, seethe with all the visceral rage you could want. Ryan Zarecki’s Bernardo is a swaggering swath of testosterone and Joe Pine is a confident yet at times conflicted Riff. It’s a damn shame they aren’t around to participate in most of the second act (oh, spoiler alert).

Perhaps the fullest characterization is handed in by Natalie Green as the fiery Anita, Maria’s confidant and the person who triggers the bloody denouement. Green’s singing and dancing skills ignite her scenes, and her duet with Maria (“A Boy Like That/ I Have a Love)” is—you should pardon the expression—to die for.

As the tomboy Anybodys, Tess Burgler revs up some dandy gender dysphoria and actually out-machos some of the Jets she is supposedly trying to emulate.

Due to technological issues on this night, the head mics had to be turned off and some of the scenes felt aurally threadbare. And director Sternfeld’s magical skills at moving people around only failed him once, when cast members walk on stage to remove some furniture during the tender “One Hand, One Heart” duet, denting the fragile mood.

But thanks to the boundless enthusiasm of the cast, this West Side Story scores a solid rating of 3½ (out of 5) switchblades. And to those who think this show is too old and sappy to be presented again, well, Krup you. 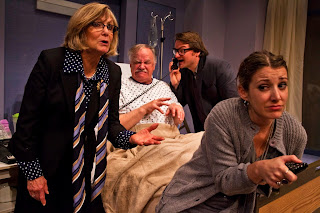 The backbone of at least half of all theatrical productions is the American-style dysfunctional family, a fetid trough where playwrights greedily feed to fuel both comedies and tragedies.

But the dysfunctions don’t often come with the level of dark humor and wicked bite that’s displayed in The Lyons, now at Dobama Theatre. Written by Nicky Silver, this play plops us down in the hospital room of a man dying of cancer and forces us to laugh at him and his whole nuclear bomb of a family.

While often uproariously funny, the script feels a bit long and overwritten in places. The talented cast, under Nathan Motta’s crisp direction, makes some missteps but lands many solid laughs and mostly papers over the show’s minor glitches.

Ben Lyons is an older man with a body riddled with cancer. But that may not be his worst problem since his wife, stylishly dressed Rita, is obsessing over redoing the family’s living room décor and not terribly upset by her spouse’s terminal situation (“Try to be positive,” she helpfully instructs him at one point).

Their grown children aren’t much of a balm since Lisa is a divorced recovering alcoholic and Curtis is gay. This is a fact the bombastic Ben regrets bitterly, saying to his son, “My life has been one long parade of disappointments and you are the grand fucking marshal!”).

The first act smashes all four of these flawed, neurotic people together into a small hospital room and the comedy sparks fly in all directions. Ben is apparently now given to launching obscenities, freed from decorum by his illness, and that powers much of the humor.

In that role, Dudley Swetland is truly a force to be reckoned with, and he knows how to time a line for maximum effect. But his Ben actually seems quite hale and hearty, rosy-cheeked and bouncy in his bed. With few clues as to his near-death state, Ben just seems like a loud-mouthed jerk rather than a vindictive, lonely and dying man who really is mean to the bone. And that lessens the impact of his character.

As Rita, Jeanne Task beautifully underplays many of her pungent lines, making them land with even more amusing snap. When Ben shares his fear about going to Hell, Rita rejoins with the quiet yet withering, “Who are you to get into Hell? What did you do?”

The downside of Task’s measured approach is that we don’t fully sense Rita’s interior battle against her own desperation, saddled with a life that’s as depressing as the living room couch that’s “matted down with resignation.”

Anjanette Hall as Lisa is a gloriously muddled mess, discovering the extent of her father’s illness for the first time and dealing with her own demons. Even though her fall off the wagon is rendered a bit too broadly, Hall brings an undeniable whiff of credibility to her role.

After a supremely tight and laugh-filled first act, the second act is a jumble.

It starts with a largely unnecessary interlude of Lisa addressing her AA group, followed by perhaps the most interesting scene in the show. Curtis is hunting for a new apartment and is attracted to Brian (Sean Grandillo), his cute real estate agent. Their amusing, unpredictable interchange is fascinating and surprising. And Christopher M. Bohan as Curtis is superb as he veers from hope to despair in his attempt to make a human connection.

Unfortunately, the script goes mostly downhill from there, ending with a tender encounter between Curtis and his (and his father's) nurse, played by Joyce M. Meadows, that forces a happy ending, of sorts.

But if you like to wallow in another family’s comical turmoil, and who doesn’t, The Lyons is your hilarious cup of acidic tea.

Posted by Christine Howey at 10:19 AM No comments:

White People, None Too Fragile Theater 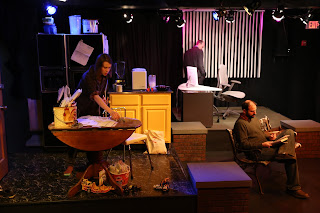 Sometimes, a playwright sets himself a bracing challenge he can’t surmount, such as writing three penetrating monologues for three Caucasians who are racist in different but very familiar ways.

That’s what J.T. Rogers attempts in his play White People, now at None Too Fragile Theater in Akron, and though it struggles mightily it never quite gets off the ground.

We meet the trio of characters on a day that is significant for each of them. But they’re all in a death spiral involving race and language that they find increasingly restrictive and torturous.

Mara Lynn is a southern ex-high school cheerleader whose life is sagging into boredom and who finds a handy scapegoat in minorities who “don’t even bother to speak our language.” Words are also important to Allen, a college professor who is fascinated and repelled by a black student, Felicia, who can destroy his arguments while snapping her gum.

And a high powered lawyer, Martin, is vexed by those who don’t dress or speak properly (“The skin color doesn’t matter, it’s the uniform that makes you safe.”). He's also put off by his teenage son who is sullen and distant

These are potentially powerful issues, addressed directly by playwright J.T. Rogers. That is the energy of this play and also its ultimate downfall. Since the characters never become truly real, isolated as they are in their own little bubbles and without human interaction, we never really know who they are or, more importantly, care what they think.

Sure, there are plenty of racist white people, and lots more who aren’t actively racist but have insecurities and fears regarding people who are different from them. A play that says that, to your face or not, runs the risk of being trapped by the clichés it attempts to skewer. And then you realize the piece hasn’t actually said all that much that’s new or revealing.

Robert Branch as Martin has the juiciest role, with plenty of laugh lines, and Michael Gatto (who looks like a cousin of Steve Carrell) is the conflicted Allen. Kelly Strand plays Mara Lynn with a shrug of resignation.

Trouble is, each actor tends to settle into a comfortable mood and then stays there, lulling the audience rather than confronting them about their closeted prejudices.

Director Sean Derry, when on stage, is accustomed to playing these kinds of inner-focused characters, and he usually does it with focused intensity. Here, his actors can’t quite reach that level of involvement, not finding ways to vary the texture of their speeches or explore pacing changes that could bring a freshness to their ramblings.

As a result, this production of White People, while intermittently funny and dark, feels mired in self-absorption when it should accost and jar the audience.
White People
Through May 11 at None Too Fragile Theater, 1841 Merriman Road, Akron, 330-671-4563

Posted by Christine Howey at 11:06 AM No comments: 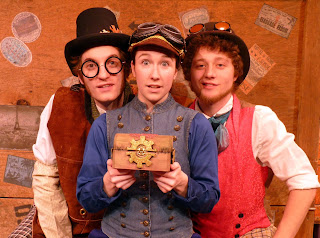 The Tinderbox, a fairy tale by Hans Christian Andersen is an apt one for kids, since it involves a witch, three dogs with huge eyes that make wishes come true, a stalwart soldier and a beautiful princess.

As always, Talespinner Children’s Theatre adds a gloss of professionalism and fun that makes individual scenes particularly interesting. One only hopes that small children don’t lose the thread of the story amidst all the staging flourishes and highly amped characters.

As for the tale itself, a soldier (Courtney Nicole Auman) meets a witch (Stephanie Wilbert) who tells of riches to be gained if the soldier returns a tinderbox to her. (Here it might have helped if the middling adaptation by Michael Geither had defined this key word for the little ones, and others, who are likely unfamiliar with the term for a box containing fire-starting tools.)

Following her instructions, the soldier encounters three magical dogs with eyes as big as teacups—the orbs are actually the size of drumheads—who fetch plenty of money. The soldier gloms the loot, double-crosses the witch, gives it all away, then gains more riches thanks to the magical tinderbox, encounters the lovely princess (Andrea Belser), is set upon by the King (Timothy Robert Thomas Maca) and Queen (Elizabeth Parmenter), and finally employs the dogs to come to the rescue.

A nice touch is the narration, provided by Demetrius (Joseph Dunn) and Artern (Charles Hargrave), who bounce observations and speculations off each other like a well-practiced stand-up comedy duo.

The story is enlivened by an imaginative and colorful production by TCT, directed (and costumed) by the irrepressible Alison Garrigan. From the stage filled with large crates (that open to reveal surprises inside) to inventive touches such as two restaurant waiters (Belser and Maca) attached back-to-back, the scenes are often action-filled and captivating.

However, the plotline itself seems a bit hard to follow at times, especially when the actors are acting their socks off and focusing more on being quirky than on just telling the story. This is always a delicate balance, especially in children’s theater, and in this production it seems to tilt just a bit too far away from easy accessibility.

That said, there’s enough eye candy onstage to satisfy any youngster, and most adults, for one hour.

Posted by Christine Howey at 9:20 AM No comments: