“The most exciting part for me is the surprises. I can’t wait to see how our audiences respond to these amazing shows!”

So said Gina Vernaci, Executive Producer of Playhouse Square, after yesterday’s big launch of their upcoming 2016-2017 KeyBank Broadway Series. Last night, the Connor Palace was packed with theater geeks (er, devotees) who were awaiting the gifts of touring shows that Vernaci was announcing.

And the fans weren’t disappointed, because Vernaci unwrapped a fantastic new season of seven shows that will delight anyone who’s been following Broadway for the past couple years, or the past seven decades.

Here’s a quick look at the line-up starting in October:

Fun Home
Based on the graphic (meaning cartoon) memoir by Alison Bechdel, this 2015 Tony Award winner for Best Musical explores the author’s awakening as a lesbian and her relationship with her gay dad. The wonderful music is composed by the gloriously talented Jeanine Tesori.

Finding Neverland
November brings us this musical that tells the story behind Peter Pan. It seems the people who make theater never tire of this story (see: Peter and the Starcatcher), but this show, as originally directed by Tony winner Diane Paulus, promises to offer some real stage magic.

Into the Woods
This is the only title on the list, slated for January 2017, that doesn’t immediately sparkle. After all, the wonderful James Lapine and Stephen Sondheim show has been done around our town for many years. But there may be more “surprises” in store, since this will be the inventively stripped-down Fiasco Theatre production that recently garnered raves in New York.

The King and I
Yes, the bald dude and the feisty teacher are back next February, reprising the show that opened on Broadway in 1951 with Yul Brynner and Gertrude Lawrence. This is a Rogers and Hammerstein classic, featuring a sumptuous set and lavish costumes. Oh, yeah.

The Curious Incident of the Dog in the Night-time
It’s based on a great book, and word has it the play is completely engrossing. It whirls around a teenager with massive smarts and some social issues who’s suspected of killing a neighbor’s dog. (The video clips of the show look astounding.) Scheduled for exactly a year from now.

Something Rotten!
A Broadway comedy romp featuring two brothers from the 1500’s who want to write a play but are intimidated by some guy named Shakespeare. So they invent the musical! What? People start singing? For no reason?! (April-May, 2017)

An American in Paris
The songs of George and Ira Gershwin set in Paris after World War II. Plus romance! How can you miss? (June-July, 2017)

The other big news is that each show will have a full three-week run, up from the current two weeks. This puts the Cleveland tour stop on the level of the big cities. And no wonder, since Playhouse Square has led the nation in season ticket holders (32,000) for three years in a row. With the expanded schedule, that means there will be 56 more shows during the season and potentially 100,000 more visitors to the Cleveland restaurants and stores.

As Vernaci notes, “Next season will be historical for Playhouse Square in more ways than one. Along with the great Broadway Series, the Ohio Theater will re-open to show off its spectacular $5.3 million renovation—all based on the architect’s original drawings."

Once again, Playhouse Square is doing its share in leading the way in downtown Cleveland. 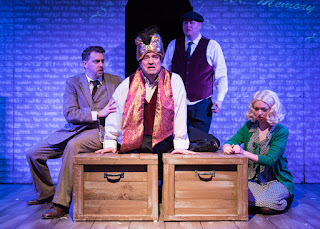 (From left: Joe Kenderes as Richard Hannay, Kevin Kelly as Clown #1, Michael Prosen as Clown #2, and Rachael Swartz as Annabella Schmidt...and others.)

In most two-act plays, you rely on the second act to deliver the real goods, whether it’s the concluding heft of a drama or mystery, or the resolving laughs in a comedy. But in The 39 Steps now at Blank Canvas Theatre, many of the laughs and amazing stage effects are crammed into the first act. And that first act is worth the price of admission, all by itself.

This madcap, frenzied play is a spoof on the Alfred Hitchcock movie of the same name, based on a novel by John Buchan. In this adaptation by Patrick Barlow, nothing is played for the chills that Hitchcock was so good at conjuring. Instead, three of the four actors play multiple roles, too many to count, in fact, as many of the Hitchcockian tropes are trotted out.

Clueless man swept up in intrigue? Check. Mysterious femme fatale? Check. The ever-present blonde? Check. Plus, there are fleeting references to many of Hitch’s movies that fly by if you’re not paying attention.

But that hardly matters, since this is all about laughs, which come fast and furious before the intermission. The story revolves around Richard Hannay, a mellow British chap who is bored with his predictable existence. Ha! Soon, he is embroiled in the murder of the sultry Annabella Schmidt, which he is blamed for, and he’s on the run. He discovers that the murder had something to do with ”the 39 steps,” and he has to ferret out the answer to save his life.

Most of the multiple characters he encounters are played by Clown #1 and Clown #2, in the persons of Kevin Kelly and Michael Prosen. Switching from entertainers to traveling salesmen to Scottish rustics, Prosen and Kelly craft a volley of distinct and interesting characters. Prosen is a stitch in several of these roles, nicely integrating his schtick with Kelly. But most of the heavy comedy lifting is done by Kelly, a clown par excellence, and he delivers laughs whether he’s bellowing or whispering, finding unique ways to move and comport himself in all his various male and female guises. He’s a freaking hoot.

The beauteous Rachael Swartz plays some (but not nearly all) the women roles, switching smoothly from one accent to another as her multiple characters tweak and tempt Hannay. Joe Kenderes handles his straight man duties as Hannay capably, but he often seems to indicate he’s in on the joke, revealing faint smiles as he’s being chased and tormented. Granted, it’s hard to keep a straight face when confronted with Kelly’s comical gyrations, but it’s necessary to make the comedy snap properly.

From a staging perspective, there’s a spectacular and witty scene in the first act when the performers fashion a train out of four wooden boxes. The projections, designed by Perren Hedderson, turn the stage into a steaming locomotive and then, in a flash, Hannay is dangling from the railroad tracks on a bridge over a river. Director Patrick Ciamacco, who doubles as the set designer, gets full credit for this jaw-dropping sequence.

Strangely, however, the second act feels several steps short of the wacky brilliance shown in the first part. The scenes seem overwritten and there isn’t the manic energy that earlier drives the show gloriously over the edge.

That said, it’s hard to find a whole show that’s as funny and engaging as the first act of The 39 Steps. It’s a treasure trove for Hitchcock fans, and everyone else for that matter.

Posted by Christine Howey at 12:33 PM No comments: Links to this post 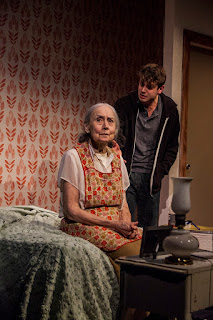 (Dorothy Silver as Maria and Andrew Gombas as David.)

You would think that any play about the Holocaust would have a lot going for it, since the subject matter is so compelling. However, that isn’t entirely true when it comes to The Revisionist by Jesse Eisenberg, now at Dobama Theatre. The script, written by the young Hollywood star and Broadway actor/playwright, frequently veers away from dealing with serious issues.

But there is one overwhelming reason to see this interesting if sometimes flawed script, and that is the presence of Dorothy Silver. Ms. Silver has been lauded over the decades for her theatrical accomplishments in Cleveland, and rightly so. But her performance as Maria, in this tale of an old woman trying to make a connection with one shred of her distant family, is truly a gem that must be seen and treasured. From the moment David, Maria’s young American cousin, arrives in her flat in Poland, Silver is in full command of the story and the stage.

And that’s a good thing, because in lesser hands this shaky effort might topple over. Callow David is trying to rework his second book of science fiction, and he’s come to Poland to find a quiet refuge at the home of his much older cousin, where he can concentrate on his task. But Maria thinks he has come to visit with her and share family stories. She is desperate for this kind of connection since, as we learn during the span of the 105-minute play, her immediate family was killed by the Nazis during in Germany during World War II.

It’s a potentially intriguing mixture of cultures and generations, and the playwright has a deft way with humorous jibes. But he often steers the conversations into shallower waters. Relying on easy comedy set-ups—Maria and David sharing some cut-up cubes of tofu, David sneaking puffs of his bedroom stash of ganja—the play continually dodges around more significant discussions. And that’s too bad, since the subjects at hand, including the importance of family and the need to make human contact, are powerful indeed.

In this production, the talented director Leighann DeLorenzo clearly wants to make the autobiographical David (a role the playwright played in New York) an unsympathetic creep who is also somehow endearing. And Andrew Gombas as David works diligently to find the right balance for his character, somewhere between sweetness and snark. John Busser, in the small role of Maria’s Polish-speaking friend Zenon, also brings some lightness to the proceedings.

But after Maria reveals her guilty secret, there are some wrenching and non-credible switcheroos at the conclusion of the play. This includes David’s reaction to Maria’s big secret, a response that feels completely tone-deaf, even for a self-centered writer twit such as David. Any author with even the slightest bit of imagination—or just a human being with a scrap of soul—would be shocked and riveted by Maria’s revelation. Instead, he just reverts back to his petty concerns.

In addition, the very last scene feels clumsily constructed by the playwright to generate surprise and confusion in the audience. A good play should always end with questions, but those should not be questions that seem unsupported by the characters.

Despite those glitches, the play does the great favor of shaping the delicious role of Maria. And fortunately for the audience, DeLorenzo enables Silver to do her thing, crafting every word and gesture with the specificity, intelligence and wit that have long been the trademark of her performances.

You must see The Revisionist for that reason, since any other reasons pale in comparison.

Posted by Christine Howey at 12:24 PM No comments: Links to this post