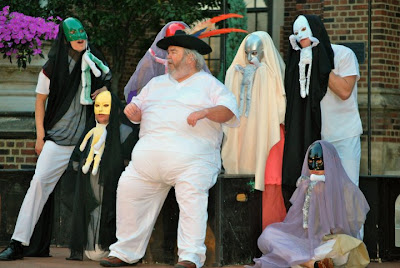 (Falstaff, Jim McCormack, surrounded by taunting fairies at the conclusion of Merry Wives.)

There could hardly be a more appropriate Shakespeare choice than The Merry Wives of Windsor for the outdoor venues of the Cleveland Shakespeare Festival. Light and frothy, Wives is filled with fanciful seductions and mistaken identities, all ending happily with a suitable moral to boot.

Running in repertory with the dark and violent Titus Andronicus, this play of clever deceits and colliding lovers is a sure balm for a summer evening. And CleveShakes does a handy job with the material, given its budget restraints and tight rehearsal timetable.

Built around the ample framework of Falstaff as a lover of some repute, the play gives all the smarts to the two wives, Mrs. Page and Mrs. Ford, who are pursued by this man of gargantuan appetites. Hip to his come on (duplicate love letters sent to each woman), the gals plan to teach him several humiliating lessons. Meanwhile, three other men are panting after Mrs. Page’s daughter Anne: the French physician Dr. Caius, the gentleman Fenton (an earnest Tyler Babcock) and Slender, the cousin of country pastor Robert Shallow.

Although some character nuances are never really explored, director Tyson Douglas Rand finds many of the broad notes, and plays them with gusto. As Shallow, John Lynch makes his presence known immediately and anchors the opening of the show. Trailing behind, Stuart Hoffman is delightful as Slender, a young man so consumed by love for Mistress Anne he can’t even stand up straight.

As one of Anne’s other paramours, Will Luchin does Dr, Caius as a taller and more macho Inspector Clouseau, wringing every laugh from his butchered accent. At one point, he refers to his competitors by observing: “As they shall be one and two, I shall make a turd.” His act is augmented by Allen Branstein as his servant Jack Rugby, a cowering and most amusing sidekick.

The central role of Falstaff is taken by Jim McCormack, who deftly handles his many lines. But there is a lustiness missing in his character, a sexual vibrancy that would make his repeated comeuppances much more satisfying and entertaining.

The CleveShakes Festival is a lovely free gift to the region, and it can turn an ordinary balmy evening into an unexpected pleasure. So bring a folding chair and check out a performance near (or even far) from you.

The Merry Wives of Windsor

Through August 8, free of charge, produced by

Posted by Christine Howey at 12:35 PM No comments: