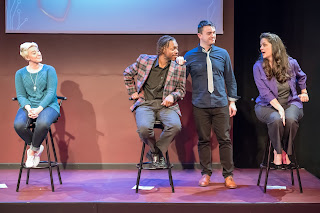 To call My First Time a half-hearted attempt at theater is to insult all the half-hearted theatrical ventures that actually have a good (if partial) heart at the core.

My First Time is actually a cynical, slapdash attempt to profit off of people’s understandable interest in sex. And it appears to be working, at some level, for creator Ken Davenport’s checkbook.

Warning: You won’t get a boner, theatrical or otherwise, from watching this fragmented, fractured exercise in terminal tedium.

Why? Well, there’s a reason you don’t collect random thoughts from people on the Internet, glom them together, and call them a play.

It’s about the first sexual experiences of people.

There’s nothing new, and nothing even vaguely interesting, here.

It’s all expressed by four actors playing way too many “characters.” They spout the words from a website where all these comments were collected starting in1998.

Repeatedly and often in single words.

The experience manages to be banal, weirdly clinical and depressing at the same time.

Everyone who has had a first sexual experience is represented—even for a nanosecond—including heterosexuals, gays, the disabled, those who were sexually abused, and 42-year-old virgins.

Well, not everyone. There are no S&Mers, no furries.

How is the acting? Lost in a welter of coy glances, cooing and sly looks. (Did I mention they’re talking about sex? Tee-hee.) One hopes these four people—Heidi Harris, Miguel Osbourne, Chris Richards, Victoria Zajac—are being well paid.

How is the direction? Aimless, by Scott Spence. Four actors, four stools, lots of words on a screen above. Not his fault: What can you do with a script from hell? His fault: He picked the script.

Audience participation? Sure, if you fill out a card. Some of those are read during the show. Don’t get your hopes up.

Is there one moment of real human connection in the entire show? Ummm…let me think…uhhh…no.

If you remember your “first time” as a sticky, embarrassing and unsatisfying mess, this play comes close to recreating that feeling.

Without, you know, the good part.

Posted by Christine Howey at 8:10 AM No comments: Links to this post