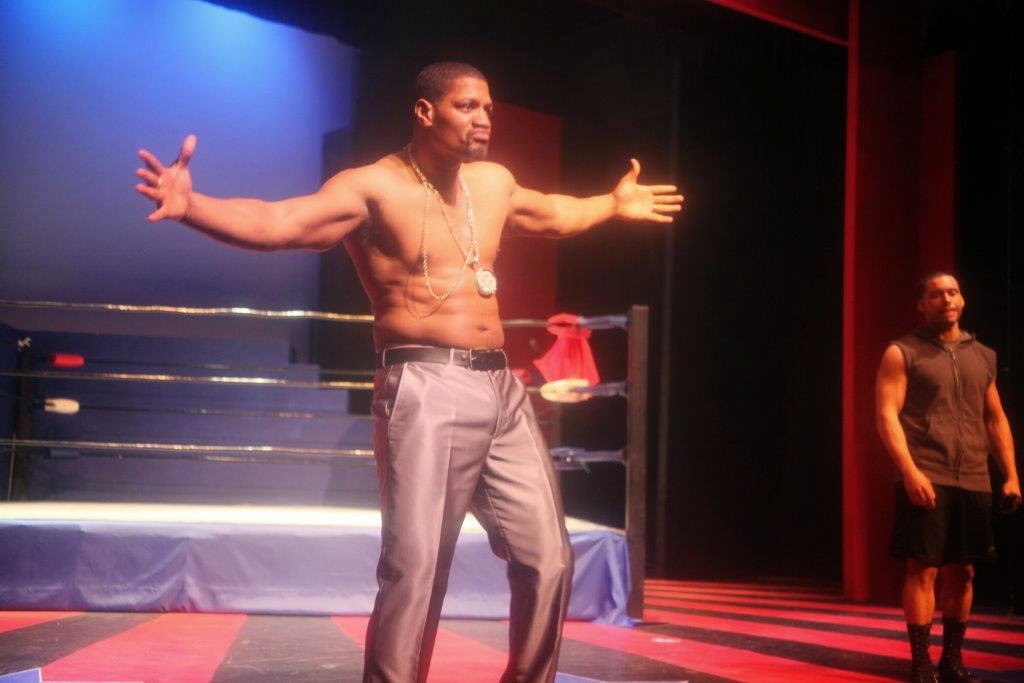 (Reginald McAlpine as Chad Diety and Davis Aquila as "The Mace.")

This is a play that desperately wants to be a satire on American values, reflected through the faux posturing (and faux everything) of pro wrestling.

Written by Kristoffer Diaz, it has all the elements of a potentially incisive look into the myths we all share about race, among other things. It is particularly on-target with the way wrestling creates heroes like the title character, and villains like the “The Fundamentalist.”

These “grudge matches” are of course simplistic, sort of the way Fox News covers politics, so the overall metaphor at work has promise.

But the script is saddled with long monologs spoken by Macedonio Guerra a wrestler who is promoted with the nickname “The Mace.”

He grew up loving wrestling and now claims he is the bomb in the ring. Except the manager of his wrestling outfit, Everett K. Olson, always wants him to train the other wrestlers and make them look good. He is seething with resentment over this, but his long speeches eventually become tiresome and repetitive.

Performing satire requires a production that is fine-tuned and consistent, otherwise it can easily turn into mush. The Karamu cast under the direction of Terrence Spivey gives its all to this effort, and there are certainly some well-ripped bods on display.

But this show body-slams itself in too many ways to eventually be very effective. Davis Aquila as “The Mace” is earnest, but he never completely conquers the droning speeches he has to impart. He, as well as others, occasionally speak too rapidly and with less than precise diction, which doesn’t help.

Reginald McAlpine struts and bellows as Diety, but we never learn much about him except that he likes to speak of himself in the third person. “The Fundamentalist” was born in India but due to his brown skin is rebranded as a Middle-Eastern Moslem extremist to fire up the crowds. He is played by Prophet Seay, a talented actor who here seems cut adrift by the need to speak in various accents, few of which ring true.

Mark Seven, as the wrestling manager Olson, speaks slowly and clearly enough. But his melodramatic gestures and facial expressions are reminiscent of silent film star Lillian Gish. Over-the-top acting is fine in a satire, as long as everyone is along for the ride. Here, it seems everyone is doing his own play, and it never comes together.

On the plus side, there are a couple brief wrestling scenes that feel pretty genuine, in a fake way of course. And kudos to scenic designer Richard H. Morris, Jr. for creating a dramatic set including a true-to-life, full-size wrestling ring.

Posted by Christine Howey at 9:48 AM No comments: Links to this post

Made in America, Dobama Theatre 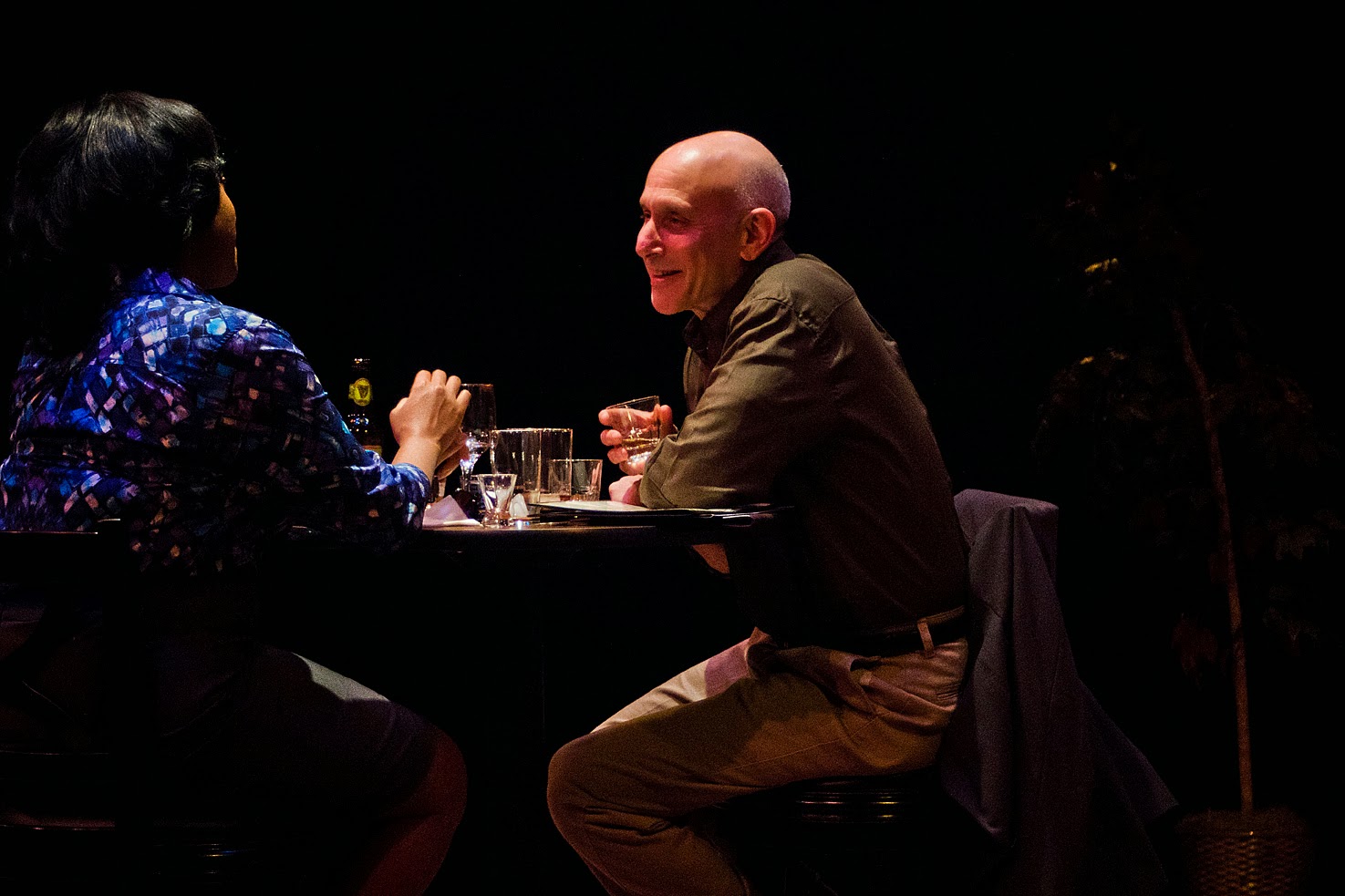 First, a confession: I love plays and movies about salespeople. It’s a small and arcane thematic niche, to be sure, but I’m all over any show that deals with people selling things to other people—whether it be siding salesmen in the flick Tin Men, William H. Macy’s car salesman in Fargo, or the den of nefarious realtors in Glengarry Glen Ross.

So maybe that’s why I really like Made in America by local playwright Joel Hammer, now at Dobama Theatre. This two-hander focuses relentlessly on a million dollar piping deal being negotiated for a huge government project.

The customer Barry meets with the sales person from one of the competing companies at a bar in a hotel. The twist is that the salesperson is an African-American woman named Esther, and she suggested the get-together at that location. Seeing that as an invitation of sorts, Barry quickly starts putting the moves on Esther, much to her apparent chagrin.

The banter continues in a semi-flirtatious way, but it’s clear that Barry holds all the cards. Esther is trying to nail down the contract after many months of effort. But Barry turns out to be a sleazebag who is after more than a lower price.

After this extended Act One scene in a bar, where drinks flow as fast as innuendoes, the play, um, climaxes in Esther’s hotel room where many secrets are revealed. Some involve the sourcing of products from overseas (thus, the title), which may be revealing to some.

Hammer’s overall conceit is clever and his dialogue mostly rings true on the surface. And director Scott Miller maintains the tension that is critical to the piece, bringing fine performances out of his actors: Hammer, who plays Barry and Colleen Longshaw as Esther.

But there is one glitch and one downright problem. During the entire hour-long first act, we never know what the negotiation is about. This is unfortunate since these details can add heft and verisimilitude to the dialogue. Plus, it’s interesting to learn the ins and outs of a different area of the world.

Hammer, the former artistic director of Dobama, plays the progressively drunk and drunker Barry well, avoiding the usual traps actors fall into when playing boozers. But that only means that Barry gets tiresome, as most drunks do after spending a few minutes with them. Longshaw nicely conveys Esther’s conflict as she tries to play along while nudging her potential customer towards a decision.

But more importantly, playwright Hammer eventually gets a bit too cute with the surprise twists and turns in the play’s second act. Each character in turn comes up with surprising revelations that initially seem to rock the other person. Then, emerging from their supposedly stunned reaction, the other person proceeds to explain why he or she saw that “revelation” coming and why he or she still has the upper hand.

This back and forth calls into question the veracity of what we’re seeing, undercutting the drama. Of course, this may be Hammer’s message, that it’s all a game and there are no real winners. But the takeaway is less effective if neither person really has anything at stake.

Still, there is much to admire and enjoy in Made in America. And, you know, it’s about a salesperson! So cool.

Posted by Christine Howey at 10:06 AM No comments: Links to this post 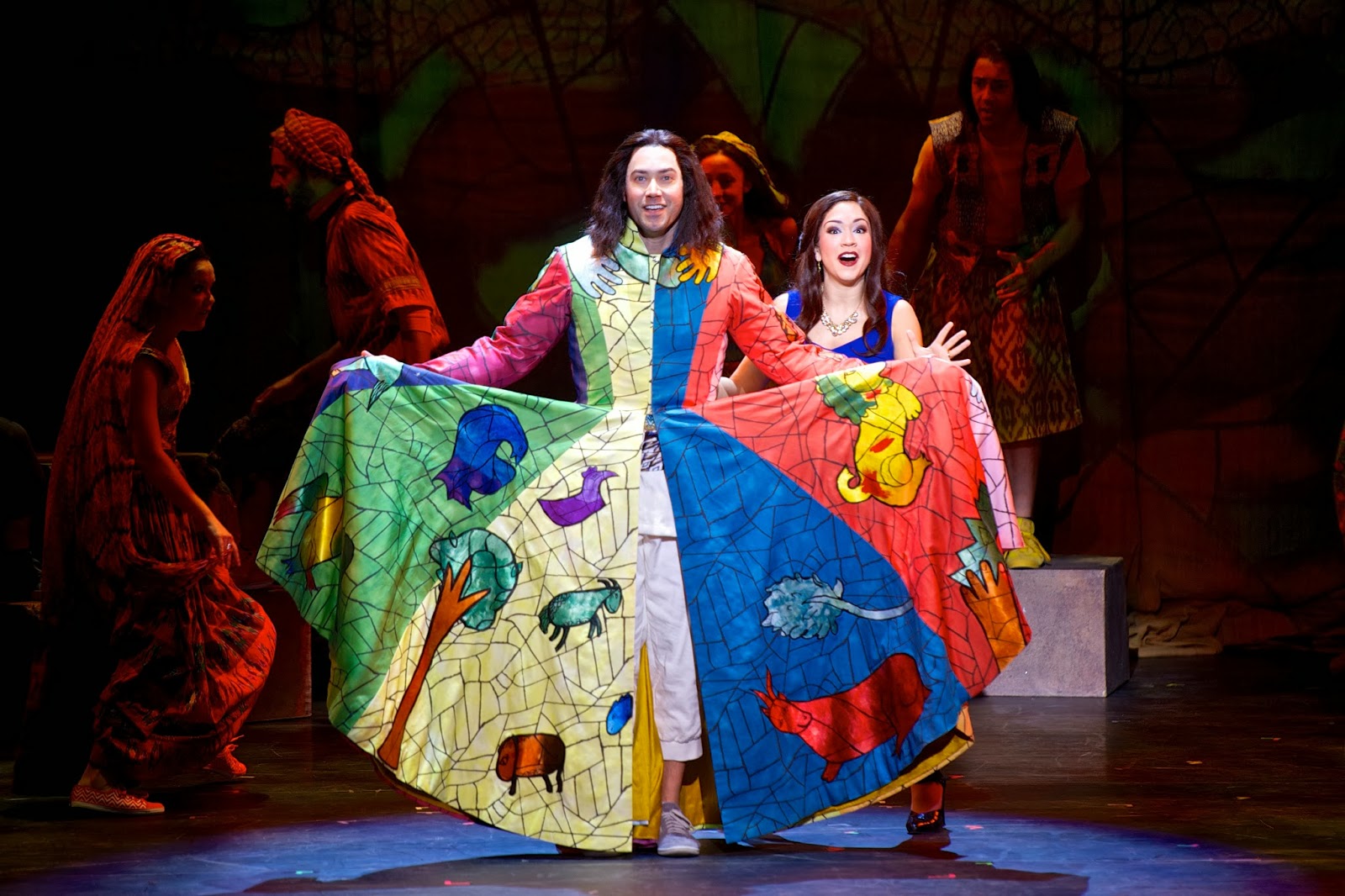 If you love “American Idol” and bare male chests, then this current packaging of the reliable theatrical warhorse Joseph and the Amazing Technicolor Dreamcoat will no doubt amaze and delight you.

After all, it stars two Idol alums, the newlywed couple Diana DeGarmo and Ace Young, the latter of whom parades around in the buff from his waist up, Putin-style, when he’s not wearing the aforementioned robe.

It’s all in service of this glitzy and slickly produced production that tells the biblical story of Joseph, his 11 brothers and Joe’s tale of banishment and redemption. That is, if you can follow the story amid all the spinning visual effects, non-stop dance routines and Young’s palpitating pecs.

In short, the father gives his favorite son Joe this snazzy coat and his bro’s are pissed. So after trying to kill Joe, they sell him into slavery in Egypt. While there and languishing in prison, Joseph learns he has skills at interpreting dreams and pretty soon he’s buds with the Pharaoh (a fair-to-middling Elvis impression by Ryan Williams).

Things turn bad back at the homestead and the brothers wind up appealing for help to the high-ranking Joseph, whom they don’t recognize. But Joseph plays a trick on them and sees they’ve changed their stripes. So Joseph shows mercy to his brothers by pardoning them and Ace shows mercy to the women in the audience by donning his coat again and covering up his rippling six-pack.

Those are the bare bones of the story but, if you’ve never seen the show before (is such a thing possible?), you’d better study the synopsis. Because once this cacophonous light show starts rolling, plotlines are left in the dust.

On second thought, the story matters little in this kind of show, where TV-familiar celebs are visiting the hinterlands and bestowing their talents.  This iteration of the 40-year-old musical Joseph is just a vehicle for star turns, a theatrical version of TV’s The Love Boat, where B and C (and sometimes D) list actors could find a bit more glory.

DeGarmo and Young aren’t nearly that washed up. But having recently come from a “Samson & Delilah” musical gig, they may want to resist getting packaged this way too many times in the future.

This is the first stop on the Joseph tour, and the company seems to be in full stride. And although neither DeGarmo nor Young have brilliant Broadway-style voices (hers a bit thin and reedy, his a tad flat), they perform the Andrew Lloyd Webber/Tim Rice score with energy.

But once the curtain call hits, interwoven with a megamix of songs you just heard, you may be hoping not to encounter another Joseph for an eon or so.

Joseph and the Amazing Technicolor Dreamcoat