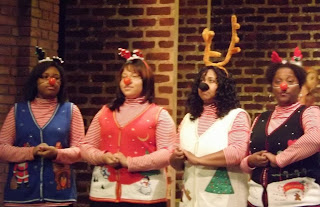 Charles Dickens' A Christmas Carol is sort of like a theatrical Mr. Potato Head, with adaptors sticking new elements onto it to fit into various cultural motifs. And why not? Chuck is long dead and the story of redemption for Scrooge (picture Dick Cheney, but with a heart) is always a crowd pleaser.

In this take now at Karamu, with music by Garry Sherman, lyrics by Peter Udell and book by Philip Rose and Udell, the scene is urban and Scrooge is an African-American slumlord who is due for a comeuppance. That all works fine and there are some clever moments in the script, such as when a transformed Scrooge wants to buy food for the Cratchit family and the only places open are a Chinese restaurant and a Jewish deli.

The songs, however, are mostly forgettable, a fact that is not enhanced by some sketchy performances. At this performance, stand-in Miguel Osborne played Scrooge and he threw himself into the proceedings, although his vocals went flat fairly often. Jacqueline Lockett tears it up a bit as Sister Hopkins, and Glenn Burchette as Christmas Future generates some laughs as the Little Richard-inspired character flouncing through his Act 2 numbers.

Posted by Christine Howey at 11:14 AM No comments: Links to this post

Pounding Nails in the Floor with My Forehead, None Too Fragile Theater 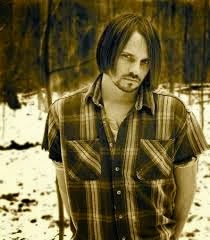 Mix festering rage with edgy wit and you have a powerful formula for theatrical success. And playwright Eric Bogosian captures a lot of that pissed-off magic in Pounding Nails In The Floor With My Forehead, now at the None Too Fragile Theater.

With Sean Derry as the sole actor, this is a revisiting of the performance Derry did some years ago as part of the Bang and Clatter company. And it once again highlights many of Derry’s significant strengths: his go-for-broke commitment to the scuzziest of characters, his precise comic timing, and his willingness to engage and confront an audience.

Under the smooth direction of Alanna Romansky, the two-act show glides from character to character as Bogosian unwraps various forms of male bile—from odd sexual predilections (one involving Dame Judi Dench fucking him in the ass while pounding on his head with a wooden mallet) to various macho frustrations with feminist excesses, suburban sell-outs and people who drive Honda Accords at the speed limit.

It is a tribute to Derry that he can still ignite jokes from some damp, dated material. In “Medicine,” the script pokes fun at all the side effects from some drugs. This was written long before the TV ads that dominate these days, with descriptions of side effects that are truly terrifying and funnier, in a ghastly way, than anything Bogosian could imagine.

While Derry has perfected his vocal presentation over the years, developing his deep guttural rasp into a kind of narrative music reminiscent of Tom Waits, this “fried” voice has its limitations. One is that it’s harder to delineate different characters since they all sound like variations of one guy.

But when that one guy is Sean Derry, you are in for one whale of a ride. And you’ll find yourself laughing in spite of yourself.

Posted by Christine Howey at 2:12 PM No comments: Links to this post 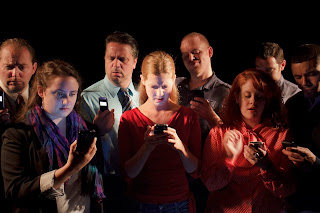 Face it, we’re now all one click away from doom—personal or professional—since our misdirected texts or elegantly composed crotch shots can be sent worldwide in a nanosecond.

This is the modern technological rat’s nest that is addressed in Doug Is a D-Bag now at Cleveland Public Theatre. Written and directed by Renee Schilling, it’s basically a knock-off of the TV show The Office with one huge innovative twist: audience members are encouraged to leave their smart phones on and use the texting function during the show.

This becomes immediately apparent when the house lights go down and many faces in the audience are lit up by their screens as phone chirps and dings float in the air. It’s kind of like being in an electronic meadow at dusk.

Set in the office of Re-Imaginate, Inc., a human resources management firm, the play tracks the fraught relationship between co-workers Doug (a nicely underplayed Matt O’Shea) and Lorie (Emily Pucell, turning a thin character sketch into a sympathetic person). Corporate buzzwords and phrases pile up as a gaggle of other workers, as well as the firm’s founder and his wife, try to resolve their own HR storms.

Accident-prone Steven (Davis Aguila) and passionate Rose (Katelyn Cornelius) are bumping uglies in the stock room while Wallace (Michael Prosen doing a respectable Dwight Schrute send-up) irritates everyone. It’s all overseen by office manager Richard (John Busser), who always has his rules and uplifting success-poster aphorisms to fall back on.

Throw in the company founder Martins (an amusing, new age pretentious Doug Kusak) and his dominatrix-clad wife Monica (smoldering Carrie Williams), along with a very self-aware omniscient narrator (Peter J. Roth), and you have a lot of characters to handle in a 75-minute show.

Taken as an experiment, Doug seems like a mixed bag. It certainly explores the idea of audience participation via smart phone. And there are some very clever moments in Schilling’s script, amid some more predictable palaver.

But it’s not clear how the audience texts impact the show, other than distracting the texters themselves from the action on stage. And while the characters are often preoccupied with their texts, it’s hard to see how that functions as a new dramatic tool of any lasting consequence.

Posted by Christine Howey at 11:45 AM No comments: Links to this post 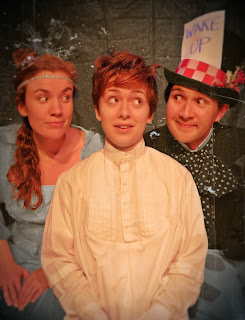 Winsor McCay, the originator of the “Little Nemo” comic strip that ran in newspapers in the early 1900s, was an acknowledged genius of the form. He inspired many artists to follow him, including Walt Disney, R. Crumb and Art Spiegelman.

Indeed, his story would make for a fascinating play for adults. But this play, written by David Hansen and based on McCay’s characters, is meant for kids. And it’s quite a treat.

As soon as Nemo (which means “no one” in Latin) nods off at night, his bed launches him into many adventures populated by the Princess of Slumberland, an Imp who speaks in a non-identifiable foreign tongue, and Flip, a fellow who keeps trying to wake up Nemo and interrupt the boy’s nocturnal travels.

Director Alison Garrigan knows her audience and keeps the action fast-paced and funny. Valerie C. Kilmer is ideal as Nemo, reacting with surprise and delight as the adventures unfold. Annie Perusek is endearing as both Nemo’s mom and as the Princess, and Tim Pringuangkeo makes Flip both a thorn in Nemo’s side and an eventual ally.

Other roles are well-animated by the angular and amusing Bryan Ritchey, Lauren B. Smith as the irrepressible Imp and Christopher Walker as King Morpheus and Santa, among others.

It’s a colorful and high-energy 45-minute show that works just fine. But one can only imagine what TCT could do with a bigger budget and an ability to show some of McCay’s jaw-dropping and often hallucinatory art.

Anyhow, at the end Nemo finds that he is not “no one,” he is most definitely someone. And that’s a lesson we can all take to heart.


Through December 22 at the Talespinner Children’s Theatre, The Reinberger Auditorium, 5209 Detroit Avenue, 216-264-9680
Posted by Christine Howey at 11:39 AM No comments: Links to this post