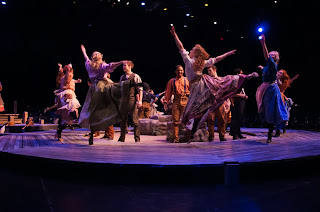 Many people have a love-hate relationship with Rodgers and Hammerstein’s Carousel. While multitudes adore the rich music and enduring tale that those two geniuses produced, others are repelled by the sexism and casual acceptance of abuse that pokes through. Not to mention a plot that lurches uncomfortably at times.

Whatever camp you’re in, this dazzling production will likely make you a lover. Directed with passion and precision by Scott Plate, the ever-spinning circles—life and death, romance and rejection, misdeeds and redemption—whirl into a most memorable event.

Adapted by R&H from a play set in Budapest, this iconic musical takes place on the Maine seacoast in 1904. Scenic designer Jeff Herrmann’s in-the-round set features a central, circular wooden deck bleached by sun and salt water, where the locals cavort. The set functions splendidly on several levels. It offers the performers ample room to dance, since Gregory Daniels’ muscular and often sensuous choreography requires some serious elbowroom.

But viewed symbolically, the circle with two attached runways neatly overlays the two gender symbols for man ♂ and woman ♀, joining them at the shared circle. This allows the women to head off one way, flouncing through their kitchen door, and the men to romp the opposite way, up onto the rigging of a ship’s mast. Freud could have had a field day with this set.

And it comes to life, gloriously, in the opening “Carousel Walttz,” an overture complete with clever mini-vignettes and a human carousel that earns it’s own applause even before the prologue is complete.

Since this is a BWU production, four major roles are double cast to provide more opportunities for their preternaturally talented students. On this night, Kyle-Jean Baptiste and Caroline Murrah played the star-crossed lovers Billy Bigelow and Julie Jordan.

Baptiste creates a brash and brawling Billy, and his tender/tough rendition of the surpassingly intricate “Soliloquy” is enough to bring you to your feet. Murrah handles the subtler role of Julie with a deft touch, enabling us to relate to her character’s sweet passivity as an artifact of the time (or at least, we wish it were so).

As for the other two double-cast performers, Mary Mondlock infuses Carrie Pipperidge with sprightly energy and Anthony Sagaria evolves her main squeeze Enoch Snow from a taciturn stud to a rigid pain in the ass.

Among the permanent cast members, Brandyn Day is alternately amusing and scary as Billy’s snarky buddy Jigger Craigin. And Lissy Gulick is just adorable as Nettie Fowler, crooning “You’ll Never Walk Alone” so melodically, Jerry Lewis must be somewhere weeping. As Mrs. Mullin, the vindictive owner of the carousel, Sara Zoe Budnik is fine although she could add a bit more edge and orneriness.

The voices of all the performers range from very good to exceptional, as one has come to expect from the B-W Department of Theatre and Dance and the Conservatory of Music. They are accompanied in this production by just two grand pianos, played with admirable nuance by music director Andrew Leslie Cooper and music supervisor Nancy Maier.

Even if some of the plot points are curious (When exactly did Billy and Julie get married? A posthumous good deed absolves all the crap you did when you were alive? Really?), this production sweeps you away with its spirit.

Indeed, it’s a play with so many perfect moments along with a handful of off-notes that it’s impossible to get all of it right all the time. But this production comes damn close.

Word has it that the short run is completely sold out. However, if someone offers you a couple tickets they bought and you’re getting married that night, postpone the wedding. You can get hooked any day, but you’re not likely to see a performance of Carousel as wonderful as this anytime soon.

Carousel
Through November 24, produced by the Baldwin Wallace University Department of Theatre and Dance & the Conservatory of Music, Kleist Center for Art and Drama, bw.edu/theatre

Posted by Christine Howey at 12:40 PM No comments: Links to this post 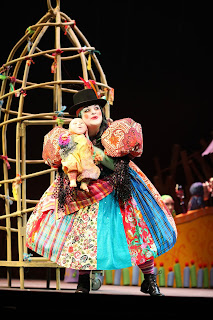 (Karen Jesse as the witch in Hansel ind Gretel.)

Sometimes, when the schedule allows, it’s good to take a break and see what’s happening regarding live performances at the high school and college level. And based on what I’ve seen this weekend at opposite ends of the Cleve-burg region, it’s clear that the kids are all right.

And if you hurry, you can catch one of them since their final performances are this afternoon.

Hansel und Gretel, Oberlin Opera Theater
For a story about kidnapping, murder and the cannibalism of little kiddies, this sure is a pretty opera. The bounteous musical material by composer Engelbert Humperdinck is immensely pleasing, performed with precision and verve by the Oberlin Chamber Orchestra and sung by a raft of talented students (some about to graduate college and a couple not yet out of grade school).

It is performed in German, with the English translation helpfully displayed on a screen above the stage.

The first act, comprising two scenes, shows H&G battling with each other at home, yearning for food as their mother and father scrap for sustenance. Once out in the woods, the kids fall asleep and wake up amidst angels.

At this performance (and in today’s), Nicole Levesque as Hansel and Emily Hopkins as Gretel sing with clarity and power, even as they poke and torment each other.

But when they met up with Hexe, the witch in Act Two who lives in a cake and candy house, the kids’ dreams of the world’s biggest sugar buzz are trampled. As Hexe, guest artist and 2004 Oberlin grad Karen Jesse sings with ferocious sweetness in her multi-colored outfit. And she’s very creepy, kind of like John Wayne Gacy in drag.

As directed by Jonathon Field and conducted by Raphael Jimenez, this Hansel und Gretel is thoroughly delightful, and sometimes quite witty. Right up to the moment when Hexe gets baked in her own oven and the children are rescued.

Cabaret, The Academy for the Performing Arts
As the TV show Glee proves, it’s al lot easier to go through high school when you’re in your twenties (and for some cast members, almost in their thirties). But when you’re 17 years old, or younger, there are a lot more issues.

That said, the talented high school cast of Cabaret does some amazing things under the direction of Tom Fulton, director of the Academy. Drawing from several schools, the Academy offers a two-year college prep program for juniors and seniors, preparing them for success in the performing arts—in college and beyond.

In this significantly de-sexualized production (a nod to the tender age of the performers, and to avoid heart attacks among the parents), fine performances are turned in by Dan Hoy (who doubles as choreographer) as the Emcee and Emily Wirthwein as Sally Bowles. Hoy’s dance with the gorilla in “If You Could See Her” is spot-on, including the original and chilling lyric at the end.

Jon Loya sings with deep resonance as Cliff Bradshaw, and R. Brendan Hall brings a surprising level of humor and understanding to his role of the aged Herr Schultz.

Even though the dialog in some scenes proceeds at a fairly glacial pace, these young actors maintain their discipline and manage to conquer this complex musical.

Ah, to be 17 again and learning theater from someone as talented and perceptive as Tom Fulton.

Posted by Christine Howey at 9:16 AM No comments: Links to this post 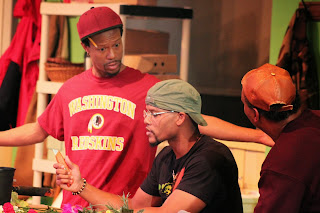 (From left: Prophet Seay as Ronnie, Dyrell Barnett as Kevin and Greg White as Paul)

We all know, thanks to the movies, that African-American men like to talk smack in the barbershop. But who knew such verbal jousting was happening in the back room of florist shops?

It’s stems that are being cut, and not hair, in Cut Flowers by Gavin Lawrence, now at Karamu House. This well-intentioned and frequently well-written script also features a bounty of missteps and wrong directions. And it is unfortunate that director Terrence Spivey chooses to amp up the melodrama whenever he can.

Still, there is an undeniable spirit to these proceedings that rescue it from disaster. And a few performances shine brightly, making the production a mixed bag of treats and disappointments.

Six black men are working in the cut flowers department of a florist shop owned by a white family. As they snip and organize their blooms, we learn about the back stories of each worker, from Kyle, the tight-ass supervisor down to Paul (Greg White), a quiet alcoholic who keeps sneaking sips from his pint bottle.

Chief among them is Prophet Seay as the loose and constantly joking Ronnie. He is a delight to behold on stage, even when Ronnie suffers a personal tragedy later on. Also strong is Anthony Brown as the beleaguered Mark, a man who is being physically abused by his wife but won’t hit back for reasons that are slowly revealed.

And Michael May turns in a glowering turn as Brian, the hardest worker in the shop who has a bundle of his own problems. The sixth man is Kevin (Dyrell Barnett), a militant young college educated man who keeps challenging his co-workers to think and feel.

An unseen receptionist Rhonda (Tonya Broach) interacts with the men over the intercom—a theatrical device that is rarely used, and for good reason.

The second act works better, thanks to a clearer set of conflicts punctuated by a drawn pistol. But the playwright’s tendency to lecture, especially through the voice of Kyle, takes the edge off of his more successful characterizations. Lawrence tries to work the central metaphor—you have to cut flowers to help them live longer—but the cutting of these people never seems equally beneficial.

Spivey helps his cast develop some strong characters, and with a stronger script and less melodramatic overstatement (be quiet Kyle), the downbeat ending would work like a charm.