Around the World in 80 Days, Shahrazad Theatre Company at Ensemble Theatre. 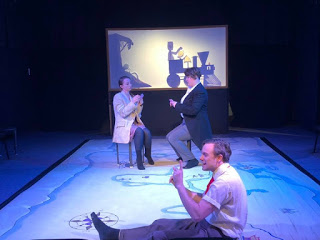 Shrinking an 80-day journey into a little more than 60 minutes of stage time is quite a challenge. But in this world premiere version of the Jules Verne classic, adapted for the stage by the Shahrazad Theatre Company  and produced in association with Ensemble Theatre, lots of ground is covered thanks to the robust direction and choreography by August Scarpelli.

It’s a highly stylized and frequently engaging production, with actors racing about, pratfalling, and generally behaving like kids amped up on too much Pepsi and gummy bears. Two performers (Kayla Davis and Becca Mosely) narrate the story of Londoner Phileas Fogg and the bet he makes with his rich buddies that sends him and his valet Passepartout around the world in attempt to beat the 80-day time limit and win a substantial pile coin. That would be £20,000 to be exact, more than two million in today’s currency.

So off they go. It’s all acted out in period-ish costumes and socks on a padded stage emblazoned with a map of the world so the audience can track the duo’s progress. Of course, they’re not alone since their every step is being followed by Scotland Yard’s Detective Fix (a hilarious Valerie Young, drawing out her vowels like skeins of ribbons). He is a most diligent and determined lawman who is eager to hand Fogg a arrest warrant—the result of mistaken identity—for robbing a bank.

Presented at warp speed, the show is entertaining thanks to some imaginative use of silhouette art behind a screen, and a few performances. As Passepartout, Kyle Huff is a dervish as he bounces back and forth between Fogg’s fuming demands and Fix’s fixations. And Huff does a happy dance now and then that is both weird and enormously satisfying. As Fogg, Hannah Storch is a properly starchy presence, arrogantly issuing orders to his valet and other minions they meet along the way.

Most of this production, including the cross-gender casting, works quite well, although a subplot involving a young Indian woman named Aouda (Andrew Keller) never makes much sense. But that’s okay, since this short show, which has a ten-minute intermission, is all about energy and momentum.

The only downside to that speed is that words are frequently lost due to a lack of enunciation. Other than Young and Storch, who display a fierce attention to proper diction, many phrases and sentences are lost in the rush.

Still, it’s a diverting way to revisit this old story, thanks to Scarpelli’s energetic direction and the inventive performances crafted by Young and Huff.

Posted by Christine Howey at 9:59 AM No comments: 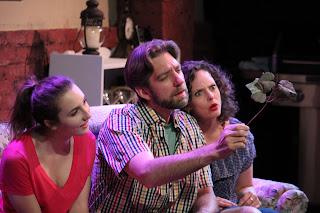 What does happiness look like for a middle-aged woman these days? If she has a husband and kids, she has the hearth and home thing nailed, but what about those aspirations she once had for a career and sexual freedom? And if she is single and has the latter, how does she feel when she’s in her forties left alone with her glowing resume and no partner or children who love her?

In short, it comes down to the eternal question: What do women want? And the answer, such as it is, is both funny and insightful in the play Rapture, Blister, Burnby Gina Gionfriddo now at Convergence-Continuum Theater. This is a densely-packed, super-heady piece of theater that never loses its grip on the audience thanks to the skillful direction of Geoffrey Hoffman.

This is a fresh turn for Con-Con, which often deals with plays that focus on gay folks—their challenges, joys and tribulations. But in this piece, four hetero women characters dominate the stage along with a man who is, by his own admission, a slacker.

Catherine (a sometimes fiery, sometimes conflicted Laurel Hoffman) is a feminist author and media personality who is visiting her pal from grad school Gwen. The thing is, Gwen married Don (Aaron Ellersich doing a mellow turn), Catherine’s boyfriend in college, and Gwen and Don now have two kids and a happy(?) life. Adding to the complications is the fact that Catherine has taken a position as a media studies prof at the school. This leads to Catherine and Don getting closer again.

Turns out, Catherine really longs for the connected family life that Gwen has, while Gwen (a nicely emotive Rocky Encalada) is envious of Catherine’s jet-setting lifestyle of freedom and academic achievement. These tensions are intriguingly aggravatged and exposed by Avery, a student at the college who babysits for Gwen and Don, and who registers for Catherine’s class along with Gwen—where they continue their feminist discussions.

Sure, it’s all pretty contrived, but playwright Gionfriddo manipulates the wordy conversations among these women with style. SAhe even manages to wedge Catherine’s mom Alice (Anne McEvoy) into the proceedings, contributing a voice from an older generation. This is particularly startling when Alice and then Catherine wind up defending some of the positions of the right-wing scold Phyllis Schlafly, who posited that women should lead in the relationship and women must follow. Yikes! Go ahead and see if that doesn’t start some heated arguments on the ride home.

If there is a wrinkle in this production, it is that the detailed words and thoughts of Avery, Gwen and Catherine are at times delivered with too much speed and slickness. This turns the intellectually appealing screeds into little memorization sideshows that run the risk of minimizing the impact of the script. More variation in the pacing of those moments could also help some of the quips (and there are many) land better.

That said, this is a well-performed, thoughtful play that covers a whole lot of ground as it diagnoses, with large dollops of wit, the state of women and their relationships. It’s like Wendy Wasserstein’s The Heidi Chronicles from a couple decades ago, but with an intellectual, feminist-oriented dissection of torture-porn and slasher movies thrown in. Now there‘s an unexpected holiday treat for you!

Posted by Christine Howey at 9:35 AM No comments: 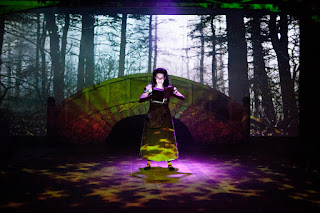 When it comes to spells that a naughty fairy can impose on a person, a curse of obedience ranks pretty high on the pain spectrum. That’s what the title character is facing in Ella Enchantedby Karen Zacarias, now at Dobama Theatre. This adaptation of the eponymous book by Gail Carson Levine explains the Cinderella story by making it all about a spell cast by the fairy Lucinda, who clearly suffers from a form of attention deficit disorder.

This is what is currently called a “family” show, but in actuality it’s really a kids’ show, since there’s little in the script to keep adults engaged. I mean, the Cinderella folk tale is part of our DNA, and we don’t exactly need a two-hour show, with intermission, to lay out the storyline again.

Sensing this, director Nathan Motta has loaded this production with all kinds of staging twists (a new pathway around the audience, huge hallucinatory puppets), and powerful eye candy (gorgeous lighting by Marcus Dana, enthralling projections by T. Paul Lowry) to keep everyone on board. All this in the service of a story that swings wildly (a wedding of giants! an attack by ogres!) and doesn’t even get around to the fancy ball and the glass slipper until somewhere in hour two.

Even with all the production razzle-dazzle, Ellais saddled with some grindingly slow storytelling, with much of the dialog delivered at a snail’s pace so the kiddies don’t lose their place. And unlike many shows and films for kids that have subtle jokes placed in the script for the benefit of the adults in the audience who brought the little ones, there is little of that until the second act when an amusing Phantom of the Operagag is finally trotted out.

The cast is strong in all the right places. As Ella, Natalie Green oozes innocence but also reveals a feisty streak as she tries to subvert her own obedience-imposed nature. Although the music by Deborah Wicks La Puma is mostly of the background variety, Green manages to infuse her songs with a sense of import.

She is backed up well by Tina D. Stump who plays loopy Lucinda and a couple others, and Amy Fritsche who is double-cast as both Ella mother (who dies early, a la Bambie) and Ella’s mean stepmother Dame Olga. As for the evil stepsisters, they are given a Saturday Night Live turn echoing the way SNL embodies the grownup Trump sons. Kelly Elizabeth Smith is Donald, Jr. (er, Hattie) who never misses a chance to do something nasty, while Neely Gevaart as Olive is the sweet but clueless Eric, being led around by the nose.

Joshua McElroy makes for a very down-to-earth (and indeed, charming) Prince, but Eugene Sumlin seems to struggle a bit to find a hook for Sir Peter, Ella’s father. His connection to his daughter and infatuation with Olga never feel fully realized, even for a fairy tale.

Part of the weakness of the show is revealed in a curtain call mini-concert, when the actors throw off their character shackles and perform some rip-roaring contemporary tunes. This up-tempo and energized performance, while certainly enjoyable, has no organic connection to what went before and serves to point out how slow and strange some the previous two-plus hours had been.

This is an extremely slick and professional production on the surface, and the acting is certainly more than satisfactory. But a story that could have been told neatly and simply in an hour or so has been padded out, and the stuffing begins to leak out by the end.

Posted by Christine Howey at 9:29 AM No comments: