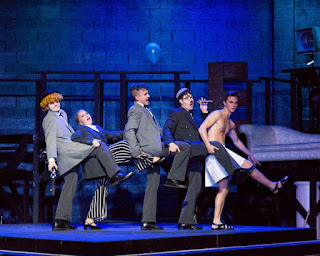 When it comes to musicals that ought to be re-imagined, there are few better choices than Joseph and the Amazing Technicolor Dreamcoat. This warhorse created by Andrew Lloyd Webber (music) and Tim Rice (lyrics) has been a constant presence in the theater community for 50 years. Thanks to countless productions at various schools and community theaters, the story of Joseph from the Bible is as familiar to most of us now as one of Grimm’s fairy tales.

There’s nothing wrong with that, of course. While familiarity with a show such as Joseph may not breed contempt, it does encourage a certain level of skepticism, since the focus is on the particular production in front of us.

In this case, the talented director Pierre-Jacques Brault has attempted a reworking of Joe and his Book of Genesis pals, setting them in 1930’s Hollywood and telling the story of a guy who’s out to bring color and flash to the black and white cinema world. This involves bringing in a variety of performers from that era including W.C. Fields, Mae West, Charlie Chaplin, the Marx Brothers and etc.

Of course, once you take that step you have to deliver on those goods, and this is where Mercury’s Joseph falls short. In theory, it would be fun to have those old-time movie stalwarts chiming in to tell this yarn which is originally about a young man who is rejected by his brothers and enslaved in another country before his triumphant return.

But that would require some spot-on impersonations to make sure we know who we’re looking at. Unfortunately, you’d have to put the character names on the back of their costumes to identify most of them. Indeed, the Marx Brothers almost sneak past unnoticed, which is damn near impossible, since the performers playing them, and all the others, never succeed in achieving anything close ro impersonation.

Since the program doesn't connect any of the actors to the roles they play—except for Brandon Schumacker who plays Joseph, and quite well at that—it’s impossible to give those folks the, um, credit they deserve. But it may not be their fault, since Mercury is producing this show in rep with Caroline, or Change, which opens in just a few days. Those are two huge shows and some acting niceties might be suffering due to the time demands on Brault and others.

In another change the starring role of the Narrator, often sung by a woman, has been dispersed among a dozen actors. This deprives the play of its central, unifying storytelling structure and will confuse those, especially younger audience members, who haven’t seen the show repeatedly over the years.

That said, the music of Joseph is as entertaining as ever, featuring songs that swing from a comically morose French ballad to country-western and many other genres. And the cast delivers the songs with reasonable flair and polish, thanks to Eddie Carney’s musical direction. Plus, Brault’s choreography adds flashes of fun.

But when you’re going high-concept with a production, it’s best to make sure you have the time and the acting resources to nail the reinterpretation. From that perspective this Joseph, in 1930s parlance, is a broken-down flivver.

Posted by Christine Howey at 8:21 AM No comments: 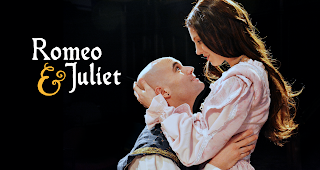 Could there be anything lovelier than seeing Romeo and Juliet in a gorgeous outdoor setting by a couple of ponds as an accomplished Shakespearian troupe presents the richly romantic and tragic story of those star-crossed lovers? After all, the Ohio Shakespeare Festival has been churning out exceptional productions of Shakespeare’s works on the grounds of the Stan Hywet Hall and Gardens for many years. So how could it miss?

Well, this is theater and things happen. And in this instance, many decisions made by director Nancy Cates wind up making this R&J substantially less memorable than it ought to be.

But before we get to that, there’s a substantial sliver of good news. In the role of the Nurse to Juliet, Lara Mielcarek is both hilarious and quite touching as she tends to the needs of her teenage charge. Mielcarek takes this character and finds every nook and cranny of interest, enabling the character to blossom in all the right ways.

This is exactly what doesn’t happen with the title roles. Joe Pine (Romeo) and Tess Burgler (Juliet) are long-term OSF company members, and they each have been brilliant in the past, in multiple shows. But in this production, directed by Nancy Cates, they’ve taken these two teens (Juliet is supposed to be 13 and Romeo a few years older) and turned them into wisecracking, very adult-seeming creeps in the first act.

Sure, it’s great if you can make a Shakespeare play accessible, and have fun with the characters. But it’s hard to find any innocence in these two, as portrayed by actors (especially Pine) who don’t exactly look like tender young folks. The bald-headed Pine has developed a reputation for being strong willed and self-possessed on stage, two qualities that don’t work so well for exploring Romeo’s swoony vulnerability.

Tess Burgler is an equally powerful presence on stage, but in this play she rattles off Juliet’s lines in the first act like a smartass 30-year-old divorcee with a drinking habit. It’s virtually impossible to look at this characterization and find any of the tenderness and delicacy of a middle-school girl in the late middle ages thrown into a romance for the ages.

Of course, this all has to change in Act Two when things start getting serious, but that turn is never made satisfactorily. This leaves the tragic final scene much less affecting than it should be.

What we are seeing here is, possibly, the “Greenshowing” of OSF’s work. For quite a few years, some of the less-featured members of the company have presented delightful songs and parodies in the Greenshow that precedes each performance. These bits poke fun at Shakespeare and are often a hoot. But now, it seems that cavalier, go-for-broke Greenshow attitude is being applied to the actual play. And if Romeo and Juliet is an example, it isn’t working very well.

This is seen clearly in the performance of Ryan Zarecki as Romeo’s trusted friend Mercutio. Zarecki has also had many wonderful moments on the OSF stage in the past. But here, he is working so hard to cadge laughs from the audience that his character’s persona is bulldozed in the process.

Indeed, when Mercutio lays down his life for Romeo in a duel with Tybalt, we don’t get the sense of the deep loyalty Mercutio feels. And that softens the impact of the rest of the play, as doom descends. Sadly, once Mercutio is dead we can’t watch Zarecki do any more hair-flipping—a talent that he has mastered, rivaling the storied hair-flips of Justin Bieber and Anna Camp.

This time around, even the Greenshow itself feels a bit shopworn. And it isn’t helped by OSF’s current fascination with (and borderline fetishizing of) hyper-realistic stage combat. Sword fights are featured in the Greenshow, and in the play itself, and are becoming as boring as well-choreographed pro wrestling takedowns.

Perhaps it’s natural for a theater company to take what has worked well in the past and then overdo it as time goes on. The solution is very simple: Go back to exploring the characters, and telling their story with creativity and passion. I call it the Lara Mielcarek Rule.

Posted by Christine Howey at 4:55 PM No comments: