Based on a Totally True Story, convergence-continuum 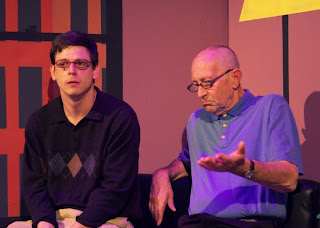 (Zac Hudak as Ethan and Clyde Simon as his Dad)

It’s always dangerous to write about your own life, especially when you have a desire to give all the characters (you, your loved ones and your friends) a positive gloss.

This is what playwright Roberto Aguirre-Sacasa does in Based on a Totally True Story, now at convergence-continuum. The central character, Ethan, is just like the playwright: a comic book writer and playwright who is in a gay romantic relationship. He is also dealing with a crisis between his parents, and has a deal brewing for a film of his work in Hollywood.

So, yes, the title appears to be accurate. Trouble is, as a true story it’s not a particularly interesting, insightful or surprising one.  The play is also saddled with structural difficulties (lots of phone conversations, lots of narration and exposition delivered direct to the audience) that director Cory Molner can’t fully overcome.

Set on a brightly-colored Sunday comics stage, nerd-geek Ethan is working on a dark play involving a sea monster and two dead children (a play, by the way, that sounds a good deal more engrossing than the one at hand). He’s also holding down a day job writing stories for “The Flash,” a speedy comic book superhero.

But his life changes when he and his soon-to-be-boyfriend Michael meet cute in a coffee shop, after Michael lands in the wrong java joint for a blind date. Soon they are doing all sorts of adorably cute New York-ish things like going to see a 1950’s French horror movie and sipping coffee at Barnes & Noble. Then they move in together.

Meanwhile a producer in Hollywood, Mary Ellen, is on the horn with Ethan pushing him to make goofy changes to his play so she can sell it to a film company. And then Ethan has to deal with his father, who announces he’s fallen out of love with Ethan’s mother and is seeing another woman.

On the surface, all this sounds promising. But the script almost defiantly refuses to make any of these scenarios distinctive. Mary Ellen’s intrusion on a writer's creative process is a LaLa Land trope we’ve seen played out dozens times, and done much funnier. As Mary Ellen, an overly stiff Lisa Wiley never captures the smooth, oleaginous Entourage-style vibe of the hard-charging flick pusher with a heart of gold.

As Ethan’s dad, Clyde Simon trots out a befuddled gruffness that works for a while, but the character is so nice one never gets a read on the challenging childhood Ethan claims to have had.

Bobby Coyne plays several small roles and shines as Tyler, Ethan’s energetic comic book editor. But his quick cameos as an Apple store flunky and a video store clerk are overwrought and weird instead of amusing. And his turn as a blond hunk who seduces Ethan on a California beach is too obvious to be sexy.

The central relationship is portrayed with skill by Zac Hudak, always a superb dweeb, as Ethan, and a sweet and sincere Stuart Hoffman as Michael. But it’s a tepid affair with chaste kisses, quick hugs and little emotional depth. Even when there is some tension around Ethan’s blossoming career, the friction generates no real sparks, just some damp fizzles.

Agurre-Sacasa crafts a number of effective laugh lines, at one point referring to the company that Ethan works for as owned by a series of corporate entities controlled by Satan. But his play collapses at the end in a welter of aphorisms as the characters sit on stage and provide individual epilogues about how they’ve grown.

Ultimately, the takeaway from this totally true story, which takes place over about 24 months, is that Ethan (and the author) had a totally nice two years, with some totally nice relationships that, even when they ended, turned out totally nice with everyone still friends.

That’s nice. And true. But theatrically, it’s not very good.

Based on a Totally True Story
Through September 14, produced by convergence-continuum at the Liminis Theatre, 2438 Scranton Road, Tremont, 216-687-0074.
Posted by Christine Howey at 1:15 PM No comments:

Tuning In, University of Akron and Razzmatazz Productions

As we all saw on the now defunct TV show Smash, it ain’t easy to create a new musical. The pitfalls are many and the clashes of egos can be a disaster.

Of course, there might not have been any of that drama as the musical Tuning In was being developed here in northeast Ohio. With music and lyrics by Larry Kass and book by Kass and Ron Newell, this is not the kind of show likely to trigger backstage backbiting, a smoothie poisoning or on-stage meltdowns. (Oh, Smash, we hardly knew ye!)

Indeed, Tuning In is so earnest and straightforward, it could have been staged in Mayberry with Andy, Barney, Aunt Bee and Floyd in lead roles. There’s not a gram of irony or a speck of meta-anything in this show, and one has to congratulate the creators for their bold and unshakeable commitment to corniness in all its dimensions.

The story revolves around a radio station (call letters are WLK, short for Welk?) broadcasting “musical memories” from a retirement home called Harmony Hill, in Ohio, where a bunch of aging vaudeville and musical stars are spending their declining years.

Trouble is, the heartless corporate owner of the retirement home wants to change the format of the station, or eliminate it all together. So the denizens of the home band together to put on a radio-thon fundraiser to save their beloved station as it is.

The show is packed with 25 songs (no reprises!), many of which showcase Kass’s ability to fashion lovely melodies reminiscent of a bygone era. The lyrics, however, are often highly predictable and bland, falling into the “moon-June” sort of sentiments and rhyme schemes that can eventually wear thin.

The production, staged by director and choreographer George Pinney, has plenty of movement. This is augmented by a rather forced plot device involving a gaggle of students who are visiting the home and provide some high kicking that the elderly residents (and actors) can’t manage.

With all those songs and three simultaneous love affairs progressing, there is certainly enough material here for a show. And Newell and Kass have their hearts in the right place, celebrating old-fashioned entertainers and their passion for the footlights.

In this cast, Dan Farrell leaves tooth marks on every inch of the scenery as the ex-vaudevillian Ruby Waxman, and Natalie Green shines in her songs as the young Shannon O’Rourke. Also, Tina D. Stump and Angela Gillespie-Winborn add some sass as the Johnson sisters.

But in order to be fully involving, it would help to have some real conflict among the characters, and not just the cardboard villain from the corporation (deftly named Mr. Coffin). One only has to read the memoirs of older vaudeville and Broadway stars to note that their lives were often rude, randy and not nearly so squeaky clean.

With some musical trimming and a bit more realistic wit, Tuning In, which closes it’s abbreviated four-show run today, might hit all the right notes. But for those who love the old tunes, these new versions are a comfy and non-threatening dip into the past.

Tuning In
Produced at the E.J. Thomas Hall by the University of Akron’s School of Music and Razzmatazz Productions

Posted by Christine Howey at 9:31 AM No comments: 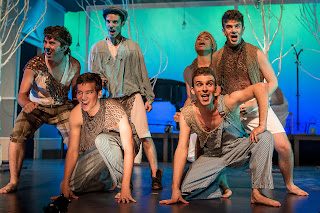 If you want to mount a show about Peter Pan, whether it’s the 1950’s version that Mary Martin made famous or this version written in the 1990’s, you have to love the idea of magic and fantasy.

And this production at Mercury Summer Stock, so visually arresting in many respects, has a firm grip on the magical idea of a flying fairy carting off three Earth-bond kids to Never Never Land.  Indeed, the final tableau of this show, with Peter raised high on shoulders against a lovely backdrop, is quite captivating.

But there are a number of air pockets in this supposedly soaring show, where this production experiences theatrical turbulence

The new tunes by George Stiles (music) and Anthony Drewe (lyrics) are pleasant and tuneful, but not particularly memorable. And the book by Willis Hall is quite matter-of-fact, without the flourishes of fresh humor that could help propel these characters on their most unusual journey.

Director and choreographer Pierre-Jacques Brault has added innovative touches, many of which work splendidly. Instead of actors swinging on cables, the flying Peter Pan and his Darling kids get air on the up-stretched arms of other actors, or ride piggy-back. This is not only cost-effective, it has the charm of children playing backyard games that resonates wonderfully with the material.

Also, Tinkerbelle is not a dot of light but a ballerina (Brittany Basenback) who leaps about with the aid of her dancing partner and embodies this fanciful creature in a whole new manner.

The uncredited set design features several white leafless trees that are stark and beautiful at times, accented by suspended lights that fade in and out. But at other moments, such as those on the pirate ship, the trees are just weirdly out of place (if kids were playing pirate ship, they’d likely not do it in a grove of trees).

The story progresses just as you would expect, from the Darling house to Never Never Land and then on to Captain Hook’s watery demise. Along the way, some of the songs and dances—particularly “There’s Something in the Air Tonight,” Mrs. Darling’s “Just Beyond the Stars” and the boyishly exuberant “The Lost Boys Gang” are definite winners.

In the title role, Brian Marshall sings his parts with the confidence of a seasoned performer. But his eternal boy is lacking the sense of fun and flashes of impish rascality that he needs. Indeed, Marshall often comes across as a fairly serious sophomore Accounting major, rather than a never-growing-up kid who can fly.

As Wendy, Kelly Monaghan delivers her songs with precision and conveys her confusion of being called upon to mother the Lost Boys when she wants a mother herself. At this performance, Dana Aber played Mrs. Darling (a part that is double cast) with plenty of heart.

Of course, the juiciest role in this show, regardless of the authors, is Mr. Darling and Captain Hook. Although he could go farther with his histrionics, Eric van Baars buckles his swash with spirit as Hook, and provides much of the comedy in a show that desperately needs more of the same.

One missing element is some physical representation of the ticking croc who swallowed Hook’s right arm (along with a clock) and that haunts and bedevils the Captain. Brault employs a phalanx of clocks at one point, and a single clock at others, to represent this menace. But it all falls pretty flat, unless you have chronomentrophobia (a fear of timepieces).

Smaller roles are handled well, including Dan DiCello as Hook’s right-hand-(you should excuse the term)-man Smee, and Dani Apple as Tiger Lily. The hard-working ensemble of pirates and Lost Boys add loads of singing and dancing energy.

This is a show that is often lovely to look at and listen to, but a slightly slow pace within scenes sucks a good deal of the energy from the proceedings. So that when the storyteller (a game Hester Lewellen) is finally identified, the impact is softer than it should be.

Still, the Mercury crew attacks big musicals like this with passion and youthful professionalism. And that amounts to a fine treat for any August day.

Peter Pan, A Musical Adventure
Through August 17 at Regina Hall, Notre Dame College, Green Road between Mayfield Road and Cedar Road in South Euclid, 216-771-5862.
Posted by Christine Howey at 10:22 AM No comments: