Me and My Girl, Mercury Summer Stock 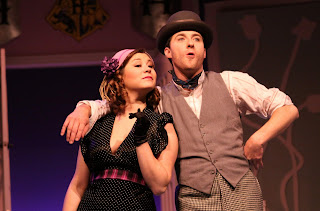 (Jennifer Myor as Sally and Brian Marshall as Bill)

If you like the idea of a lustrous red robe trimmed in “vermin” and a man who, when beset by assorted tribulations, cries out: “Infamy! You all have it infamy!” then your pun ship has docked. It’s Me and My Girl, the 1937 musical that is being given a delightful, if occasionally uneven, production now at Mercury Summer Stock in Parma.

Set in 1930’s England, in an upper-crust manse and a some low-end dives, this send-up of class warfare British style is sort of a My Fair Lady for the opposite gender. It seems that a pickpocket from the mean streets of Lambeth, Bill Snibson, has been determined to be the heir to the title of Earl of Hareford. So Duchess Maria and Sir John Tremayne are saddled with the task of tutoring brash Bill in the ways of proper etiquette and such, so that he can glom onto his inheritance.

Of course, we’ve seen this all before, but the book and lyrics (L. Arthur Rose and Douglas Furber) and the music (Noel Gay) turn what could be a period snoozer into much more than that. And the MSS production, under the crisp direction of Pierre-Jacques Brault, has such an infectious sense of joy that it melts all defenses.

A major reason for the evening’s success is that the central role of Bill is played by Brian Marshall, a performer who seems electrically charged from the moment he hits the stage. Whether he’s dancing, executing pratfalls, or mangling the King’s English, Marshall is confident and in total control. Even though his singing is a bit weak, Marshall knows how to make a tune succeed even when the notes are a bit faint or slightly off key.

He is matched nicely by Jennifer Myor as Bill’s heartthrob Sally, another denizen of the streets who is due for a makeover. Myor’s vocals, especially on “Once You Lose Your Heart,” are well crafted and deeply felt. Also excellent is Hester Lewellen as the uptight Maria.

Smaller roles are a bit of a mixed bag. As Sir John, the man who surreptitiously helps Sally clean up her speaking style, Jon Fancher never seems to find a clear attack, so the humor that could be generated by this character is muted. The young couple of nobility, Jacquie and Gerald, are given a sharp turn by hot-to-trot Bailey Carter Moulse and a spectacularly tight-assed Brett Parr. And as the virtually mute Sir Jasper Tring, Joseph A. McIntyre has a comically blank stare that is oddly hypnotic.

Although a few of the songs are quite forgettable, there are a couple musical highlights. In one, “The Family Solicitor” trills about his role to the cadence of Gilbert and Sullivan, In his role as attorney Herbert Parchester, Dan CiCello lands some amusing verses even though he appears near exhaustion at times. And the Act One showstopper, “The Lambeth Walk,” is performed by the entire company, on stage in the aisles, with such exuberance that it’s hard to remain seated and not join in.

Excellent costuming, a hard-working bare-bones keyboard orchestra, and some ambitious set design effects (the animated portraits almost work) contribute to the overall sense of a theater company going all out to deliver a great show. And while this Me and My Girl may not be great in every sense, it’s sure to send you on your way smiling and humming “The Lambeth Walk.” 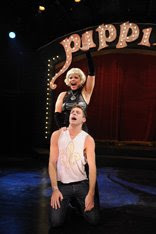 Coming of age stories are irresistible for writers of all stripes, from short story scribblers and novelists to those who construct musicals. Indeed, one of the most popular musicals of all time, The Fantasticks, is about how a young man travels from innocent naivete to the beginnings of worldly wisdom.

And so it is for the title character in Pippin, now playing at Cain Park, the story of the son of Charlemagne who graduates from college and sets out to find fulfillment. The book by Roger O. Hirson and the 1970s-style pop music and lyrics by Stephen Schwartz trace a fairly predictable arc, but this production brings them to life in some surprisingly electrifying, as well as a few off-putting, ways. Thanks to Victoria Bussert’s energetic direction and the something-borrowed, something-new choreography of Martin Cespedes, the entire evening has more hits than misses.

Dominating the landscape Pippin occupies is the Leading Player, who employs her troupe of kinkily-clad actors to introduce the young man to the ugly realities of tyranny, war, family strife and shattered dreams. Along the way, Pippin seeks shelter with his beloved grandmother Berthe and ultimately with a widow Catherine (a game Devon Yates), her son and their mundane life.

This is a lot of territory to negotiate in a little over an hour and a half, but the Cain Park company manages it well, for the most part. In the role of the Leading Player, usually a man, Bussert has cast Jessica L. Cope. Looking like Doris Day from the neck up (platinum hair and page boy bob) and Cher from the neck down (circa “If I Could Turn Back Time”), she exerts a menacing force on the budding Pippin. Even though Cope doesn’t have complete control of her voice in some of the more demanding songs, she sells them all.

As Pippin, Corey Mach sings with passion, bringing a youthful sense of striving to “Corner of the Sky” and “Extraordinary.” But his costume by Production Designer Russ Borski sends him off in the wrong direction. Dressed in contemporary style with a sleeveless shirt revealing his guns and his underwear waistband peeking out over his jeans, Mach seems swaggering and hip instead of earnest and innocent. As a result, his moments of catharsis, such as when he confronts the grisly carnage of war, don’t register as powerfully as they should.

Chris McCarrell, who’s as thin as a fireplace match, burns hot as he lends an aura of androgynous menace to Lewis, Pippin’s brother, while Maryann Nagel as Berthe battles a hideous outfit and her overly-uplifting song “No Time At All” to a draw. Jay Ellis sings well as Charles, Pippin’s father, but doesn’t take any chances with his portrayal of this conflicted character.

The real stars of this production are the group numbers, with some mesmerizing participants such as Antwaun Holley and Jens Lee. As the ensemble dances with flash and flashlights, and a snarl hidden by smiles, they try to lead Pippin to his ultimate fate, his perfect “Finale.” And that’s what makes this Pippin pop.

Pippin
Through August 23 at the Alma Theatre,
Cain Park, corner of Lee and Superior,
Cleveland Heights, 216-371-3000
Posted by Christine Howey at 9:21 AM No comments: Links to this post