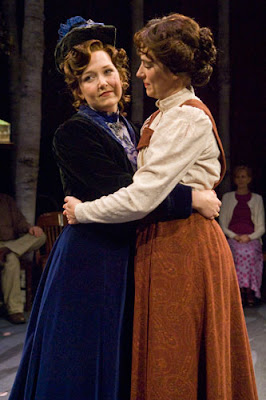 (Kelli Ruttle as Ranyevskaya and Eva Gil as Varya)

If people were like trees, we’d never forget a single thing. That is a beauty of nature: no matter the storms it endures, it continually replicates itself in every detail, even as it grows. Meanwhile, humans are destined to get older and bigger but misremember important occurrences from the past, be tortured by others, and just flat out forget still more. From that standpoint, compared to nature we’re not even qualified to be a respectable weed.

In The Cherry Orchard, Anton Chekhov marries those thoughts in, what for him, was a comical play verging on farce. It’s the story of an aristocratic but now penniless Russian family whose vast estate, with its fabulous orchard of cherry trees, will be auctioned off to pay their debts. While being stabbed with piercing moments of clarity about their pasts, and the hurts that reside there, they must deal with the present—and with glorious natural surroundings that seem to mock their meager attempts at coping.

In a modest bow to the many interpretations of this play, this Cleveland Play House production in association with Case Western Reserve University is simply called An Orchard. As it turns out, that is apt since the shortened title is mirrored by the fact that the number of characters has been substantially pruned, while also trimming some of the emotional wallop that this story can generate.

Director Mark Alan Gordon, who compiled the adaptation along with the graduate ensemble of 2012, helps his cast find much of the humor in Chekhov’s words. But the young actors miss a number of the nuances that should lift this tale above the ordinary.

When Lubov Andreyenva Ranyevskaya, nicknamed Lovey, returns to her family’s estate, along with her brother Gaev and her grown daughter Anya, the atmosphere is bittersweet. Gathering in the child’s nursery, a memory-inducing setting if there ever was one, Lovey is confronted with the ugly current reality by Lopakhin, a merchant who formerly worked as a servant on the grounds of the estate. He urges Lovey to divide the estate into small parcels, to sell as plots for vacation homes.

But Lovey is a woman caught between forces she doesn’t understand. Spending freely and irresponsibly has been her way of life, and now that change has arrived she can’t bend with the wind. As a result she, her family and friends, and even servants are ripe for destruction.

In the complex role of Ranyevskaya, Kelli Ruttle hits a variety of separate notes with great style, and her rendition of "When the World Was Young" at the start of Act Two is affecting. But there isn’t enough subtext to convey this woman’s full and often contrary persona. Flamboyant and haunted, generous and controlling, Lovey is really a piece of work, which is only glimpsed here in part.

As Lopakhin, Dan Hendrock has energy to burn as this driven and aspiring man. And his delivery feels a bit stilted and considered, as it would for a man who feels somewhat out of his element. But in his climactic scene, when he announces his purchase of the estate, there is joy and amazement but not enough anger borne of his rage at his humble history in that place.

Andrew Gorell, in the role of Gaev, enjoyably trumpets his wordy flourishes, but he doesn’t quite capture the childish arrogance of a man who has never fully grown up. Michael Herbert essays the “eternal student” Trofimov with a rumpled sort of idealism, and the adopted daughter/estate manager Varya is played by Eva Gil with repressed anger. But she could do more with the moment when she throws her house keys down in disgust, before she is about to be thrown out the door. Yan Tual triggers some chuckles as Firs, the nearly deaf manservant, but his shuffling old man schtick, although a nice homage to Tim Conway, gets a little tired.

At first glance, the set design by Jill Davis is stunning, with audience seating arranged in a circle, in a tall space draped with heavy curtains and lighted with chandeliers. There are also several birch tree trunks that extend from floor to ceiling, bringing the essence of nature into these living quarters.

Upon reflection, however, the set is less appealing since it does not suggest a nursery in any significant way. And the trees, while amazing to look at, seem firm and stalwart—just the opposite of cherry blossoms that are fragile and easily destroyed, which is part of the playwright’s central metaphor.

An Orchard is just that, one more take on The Cherry Orchard that is delightful in places, but that feels a bit too condensed to be thoroughly satisfying.

Through November 6 at the Cleveland Play House,

Posted by Christine Howey at 1:39 PM No comments: 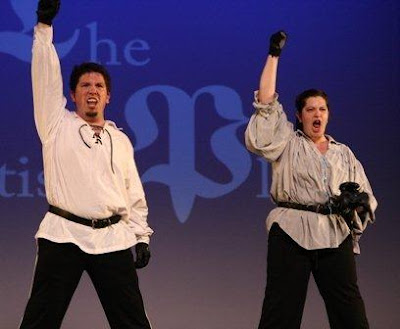 
Chances are, if you brought a Shakespeare devotee together with a young person hooked on movies such as Slaughtered Vomit Dolls and Ilsa: She Wolf of the SS, the conversation might not go swimmingly. But oddly enough, they each occupy common ground in their entertainment passions when it comes to one thing: violence.

It's no news that there is ample gore in the works of The Bard, and those skewerings, beheadings and poisonings are the sum total of what appears in Kill Will, directed by Alison Garrigan, now at the Cleveland Public Theatre.

Show creators and sole performers Josh Brown and Kelly Elliott gather some of the more gruesome moments from Shakespeare’s plays, spin them with a froth of contemporary cultural references, and then act them out using their talents as fight choreographers. The hour-long result, depending how you look at it, is either a very amusing gym class or a less than absorbing but mildly entertaining theatrical event.

With a video screen announcing the plays from which bloody scenes are lifted, Brown and Elliott toss each other onto the (padded) floor, bounce their faces off walls and columns, and generally create mayhem. As they abuse each other, they work in modern allusions to movies such as Star Wars and self-defense equipment (Desdemona brandishes pepper spray).

Some of the bits are inspired, such as a video game sequence with Macbeth done as Mortal Kombat as we watch the game characters on the screen do each other in, complete with spurting blood. And Titus Andronicus is awash in sparkly red plasma.

Other scenes are yawners, including a battle with poles, “armed” with pillows on each end, which turns out to be about as fearsome as it sounds. And an attempt to do Richard III with stuffed animals is promising until it becomes clear there is no further wit at work other than the concept itself.

Actually, the script for Kill Will has a number of clever, inside references to Shakespeare and his works. But it could use more of those, which could hlep this piece rise, more often than it does, above a silly sort of calisthenics.

As you might imagine, the show also includes audience participation. But clench not thy teeth: it actually works. Indeed, on this night a couple things the audience members improvised to portray Shakespearean suicides were funnier than what the performers thought up.

The actors themselves (who are married to each other) are an odd fit. Brown has an agreeable affect, with a sly smile never far away, that makes him easy to like. But Elliott relies too much on yelling for projection, and on a grimace for facial expression. It’s not clear if she’s supposed to be the “bad guy” or she just comes across that way. In any case, the combination feels slightly off-center. There is also a subtle marital subtext to all of this, but it doesn't work and just gets in the way.

Anyhow, if you’re in the mood for a non-demanding evening, with tons of non-violent violence, then Kill Will should do the trick.

Through October 30 at Cleveland Public Theatre,

Posted by Christine Howey at 10:04 AM No comments: 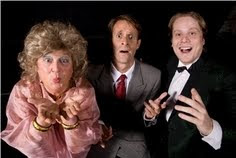 
First, let’s get one thing straight. I am not capable in any way of attempting to write a satire of Turkish culture, in their language, and have it ring true to people in Ankara. Hell, I couldn’t even get one sentence written. So I stand in awed respect for anyone who can try to accomplish a similar daunting task.

That said, the issue around Don’t Call Me Fat, a play by visiting Turkish playwright Ozen Yula now receiving its world premiere at Cleveland Public Theatre, is whether this send-up of America’s gluttonous ways works. And sadly, it doesn’t. Sure, it’s excessively long, but the problem isn’t that the play is wordy. It’s that the words consistently fail to amuse, entertain, or enlighten.

Oh, there are some momentary shocks, to be sure. Since the morbidly obese John Doe (really? John Doe?) spends all his first act time in a hospital bed, his crazy relative Jane Doe (Lissy Gulick) blisters him with a litany of f-bombs and fat-boy insults. And those can generate some nervous laughter, simply from their frontal outrageousness.

But obesity is a subject that’s been chewed over in the U.S. damn near constantly for many decades, and it’s hard to find a new way to satirize it. Playwright and director Yula attempts this in part by giving John (Kevin S. Charnas) an invisible friend—a young woman, Joanne (Faye Hargate), dressed as a Playboy bunny on a swing above him. Joanne is prone to drift off into little stories that delight corpulent John but which are less than enthralling for the audience. There are also predictable parodies of the "helping" professions such as psychologists and physicians.

Many of the jumbled references in the play seem as dated as the Playboy bunny riff. In the second act, John has been magically transformed into a lean stud, and a craven TV producer (Lew Wallace) is trying to make buff John the hot new folk hero in America. Problem is, the play tries to do this by lampooning a clunky TV show style that went out with This Is Your Life more than 50 years ago, bringing on guests from John’s past including his drunken and deluded mother. Clumsy and nearly unintelligible video clips, which are half-obscured by the set, don't help. Neither does the shaggy dog ending.

There are multiple elements in this show that might, conceivably, work together given some rigorous editing and rewriting. But the playwright is heading back to Turkey soon, so that seems unlikely.

Word has it that Yula’s visit has been edifying for those who have interacted with him. Let’s hope that is true, because the seven on-stage cast members give their all for his play. But the flabby Don’t Call Me Fat is suffering from advanced theatrical arteriosclerosis, and the prognosis isn’t promising.

Through October 30 at the Cleveland

Posted by Christine Howey at 9:02 AM No comments: