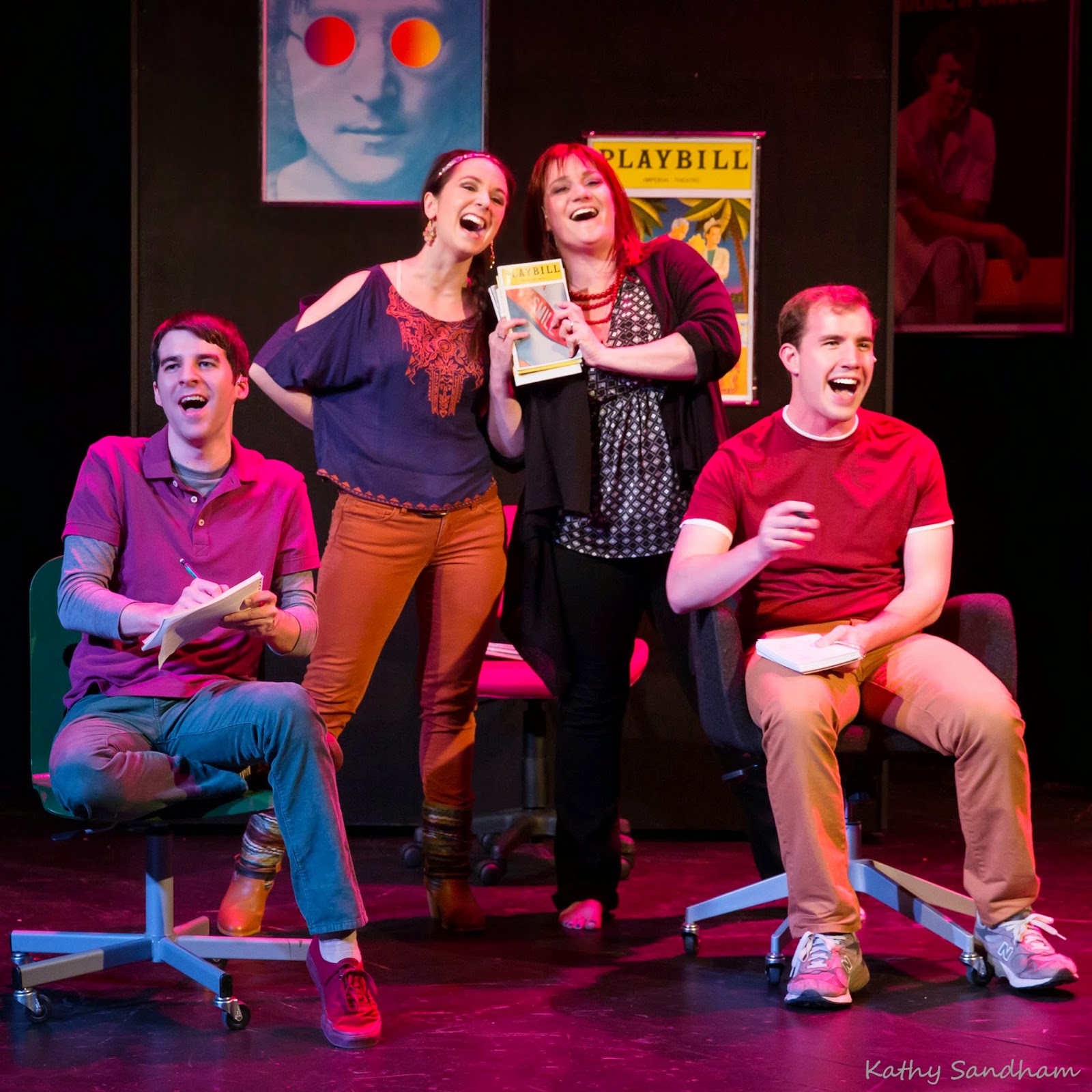 When I was a creative director at advertising agencies, a rookie copywriter would occasionally propose a radio spot for a car dealer with this pitch: “See, it’s two ad agency guys sitting around talking about what would make a good radio spot for our car dealer. And as they talk and crack jokes, they cover all the copy points. When they’re done talking, the spot is over.”

Those well-meaning copywriters were sent back to their cubicles with their Dixon Ticonderogas tucked between their legs, because that is a too-easy, too-facile way to write an engaging spot. The same, it turns out, is true for the theatrical version of that gambit, which is [title of show], now at Beck Center.

This musical is centered on the creators Jeff Bowen (music and lyrics) and Hunter Bell (book) sitting around and talking about how to write a musical. They are joined by their gal pals Susan and Heidi, and soon they are riffing on all sorts of theatrical and cultural minutiae circa 2006, when the play was first produced.

No doubt, there were howls of laughter eight years ago as the script and songs poked fun at "stars"  such as Shields and Yarnell to Heidi Klum. But these pop references have not aged well. If fact, they are so squishy and soft there’s not a hard edge of contemporary wit in the entire piece. This is why the on-going satirical wonder Forbidden Broadway keeps remaking itself, rewritten more than a dozen times since 1982, so the jibes stay fresh.

The only jokes that work here, even a little bit, are the meta references. As when they mail their script off to a new play festival and one asks, “If the play is in the envelope, should we still be talking?”

Of course, being a meta show the writers flagellate themselves before critics have the chance, worrying that their material is “self-indulgent and self-referential.” And they’re right, especially now.

The cast of Will Sanborn, Pat Miller, Amiee Collier and Caitlin Elizabeth Reilly try their best under the direction of Scott Spence, with the on-stage accompaniment of Larry Goodpaster at the keyboard. All four sing well, and the women fare better than the men in terms of shaping their characters. Plus, the penultimate song, ”Nine People’s Favorite Thing,” is still a winner.

But you couldn’t revive this show with the world’s most powerful defibrillator. Though [title of show] won an Obie Award in 2006, it now needs to be taken behind the barn and shot—so Bowen, Bell and the rest of us can move on with our lives.

Posted by Christine Howey at 5:11 PM No comments: Links to this post 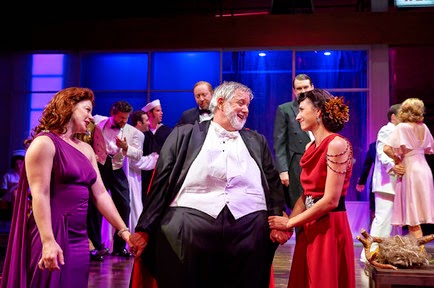 A couple seasons ago, director Tracy Young lit up the GLT stage with a boffo reinterpretation of The Taming of the Shrew. And it was lauded by this reviewer for its outrageous and mostly successful, “balls out, imaginative” production.

Well, sometimes when you go balls out, you run the risk of getting something snagged in a zipper, as happens in the current modernized staging of The Merry Wives of Windsor. Sure, there are plenty of outrageous and off-the-wall moments in this exercise, often tumbling one atop the other.

But the supposed humor is consistently lacking in wit (a “cut the cheese” joke, followed helpfully by a fart reference, for the slow of mind) while the puns (“Hot venison for dinner?” “Oh, dear!”) feel carefully manufactured. You don’t have to be a Shakespearean purist to want something more than that, in a piece that dares to rewrite (or write alongside) the Bard.

This Wives is larded throughout with attempts at humor circa the late 1940s (although the set by Rick Martin evokes the clean, stark lines of a later time). The denizens of a small Wisconsin town are dealing with the personage of Mr. Falstaff, a Hollywood-style raconteur who is in town trying to reignite his career. He decides to put the moves on two local married women, Mrs. Ford and Mrs. Page, using his ineffable charm and ample girth to win them over and gain access to their bank accounts.

Mr. Ford (a hyperventilating Lynn Robert Berg) goes nuclear with his jealousy when he learns about Falstaff’s plans, and they both share unfortunate encounters with a rolling dumpster.

There are still some of Old Will’s lines in the play, and they ring true and charming. But finding them amidst all the hee-haw of this bloated extravaganza becomes a rather odious task, like picking whole kernels of sweet corn out of a cow pie.

For silly stuff to work on stage, it has to have sharp and genuine wit, which is on display in plays such as Spamalot, Urinetown, and Avenue Q. Otherwise, it’s just a collection of old jokes lashed together loosely with mugging and forced gaiety. It's the "try to do something funny here" school of acting.

Besdies a lack of wit, genuine or otherwise, this version of Wives is bereft of any sense of control, which is necessary for humor to work effectively (and which was present in the much more successful Shrew). Young throws everything at the theatrical fan, including slapstick (yes, there’s a pie in the face), and funny dances and walks (but not funny like Monty Python).

There are also bad French accents (often unintelligible mash-ups of Pepe Le Pew and Inspector Clouseau—but not as cute as the former or as hilarious as the latter). Tom Ford as Dr. Caius and Tracee Patterson as Madame Quickly are saddled with the task of hauling those accents around, and unfortunately the works shows.

As for the Wives, Jodi Dominick as Mrs. Page and Laura Walsh Berg as Mrs. Ford over-emote as the concept dictates, leaving the sly humor Shakespeare intended floundering in the wake of hissing catfights and such.

Of course, the rotund Falstaff is at the center of this melee. But Aled Davies, a most accomplished actor, seems like an unsuspecting fellow who stumbled into the wrong party. He always seems a bit too natty and uptight for the carousing and impulsive drunkard. For instance, his scene climbing out of the dumpster garbage should be a howl, but instead it just feels a little pathetic. Instead of cackling at the foolish plight of this adorably pompous ass, you want to help clean him up, straighten his tie and hand him his briefcase.

All that said (and still leaving a lot unsaid, as we won’t go into detail about the Magic Trick! Canned Laughter! Food Fight!), Young and GLT should be thanked for trying to breathe new life into Shakespeare. Taking risks is what good theater is all about. Because, done right, an audacious adaptation of Shakespeare can work just fine. This time, however, their Merry Wives is a witless spit-take.

Posted by Christine Howey at 10:26 AM No comments: Links to this post 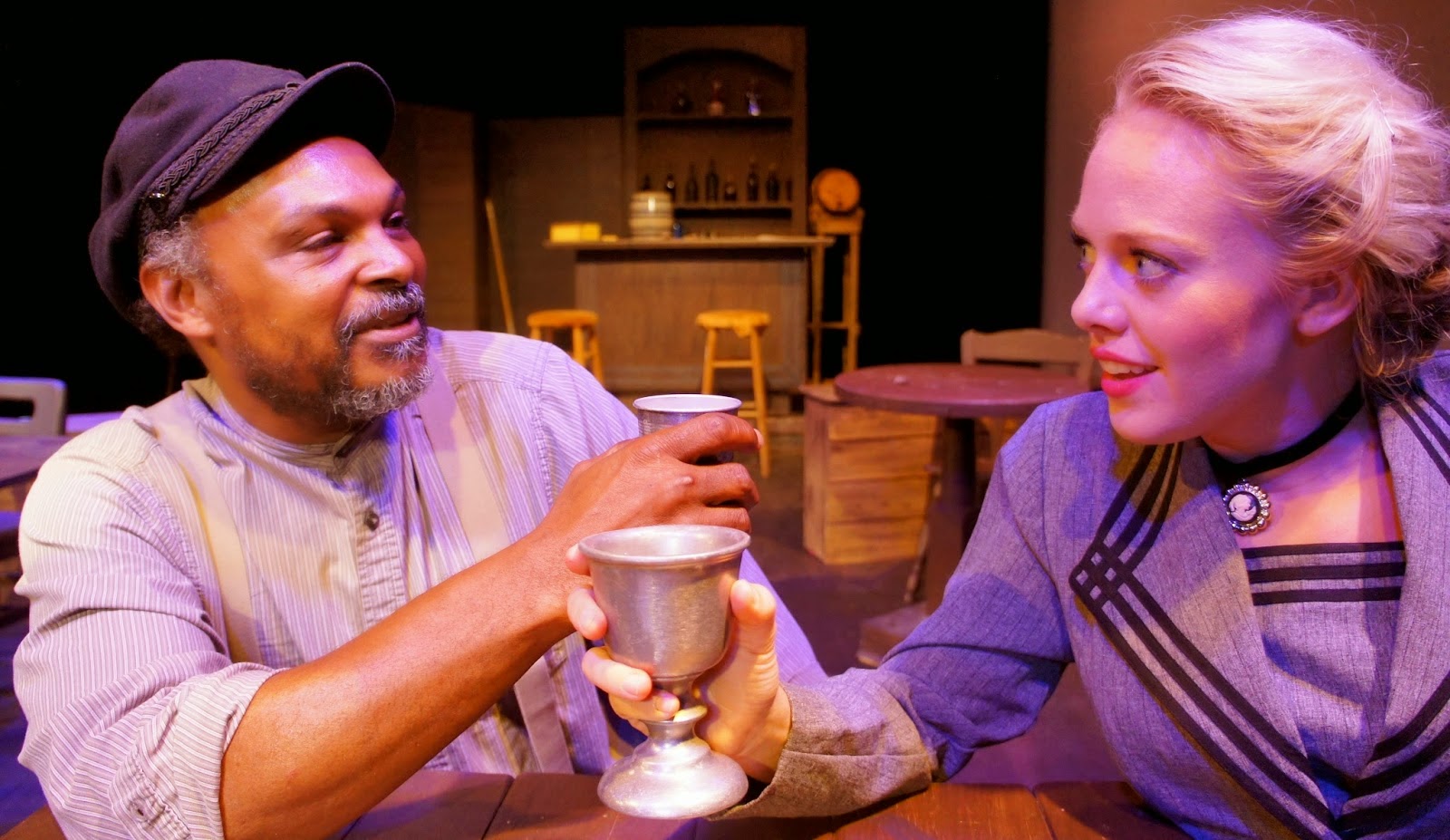 (Greg White as Chris and Katie Nabors as Anna)

Even though labels can often be misleading, sometimes they are dead-on accurate. And so it is with two labels connected to Anna Christie, now at Ensemble Theatre.

The first label is the Pulitzer Prize label, which this play by Eugene O’Neill was awarded in 1922. Although perhaps a bit melodramatic by contemporary standards, Anna Christie is a work of amazing force. Sure, it’s waterlogged with a flood of “dat ol’ davil sea” references and the happy ending feels pre-Disney-ish. But this play earns that award with distinct characters who never fail to intrigue.

And the second accurate label is Ensemble Theatre, since the acting assemblage under the direction of Ian Wolfgang Hinz is tight and admirable, meshing together to craft an engrossing story.

Old Swedish salt Chris Christopherson sent his daughter Anna away to live with relatives in Minnesota, to get her away from the sea that has ruled his life. And now, grown-up Anna, who had been working as a prostitute inland, comes back to meet her dad and wash herself clean in the same seawater that bedevils papa.

But when a shipwreck survivor, Mat Burke, comes on board, the personal dynamics shift and there are plenty of rough seas ahead.

The company of actors is strong from top to bottom. As Anna, Katie Nabors counters her physical beauty with enough behavioral rough edges to convincingly portray this whore with a heart of, if not gold, than a nicely polished brass.

Greg White, in a wonderful example of non-traditional casting, is a reflective and often amusing Chris, conveying the look of a crusty seaman while trying to overlook his daughter’s seedy past. White exudes a personal warmth that floods the stage, much as the ever-present fog. And while Michael Johnson as Mat defaults a bit too often to a smirking sort of arrogance, his spot-on Irish accent and focus helps his character play effectively in all his scenes.

In a small role in the first act, Mary Alice Beck trots out a splendid turn as Marthy, Chris’ blowsy dockside squeeze, a veteran boozer herself. Stephen Vasse-Hansell does a neat job as Larry the bartender while Allen Branstein and Kyle Huff fill out other roles nicely.

Sure, we might wish that director Hinz had tried to infuse a bit more nuance into the smiley-face ending. But this is a production that gleams brightly throughout, so we won’t sweat the ending that much.

Posted by Christine Howey at 10:00 AM No comments: Links to this post