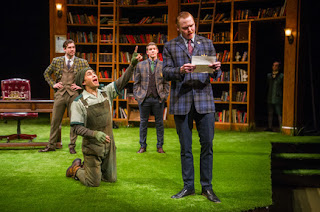 You’d think that a play that’s all about love would be fairly simple. But when it comes to Shakespeare, nothing is as simple as you might think, or might want.

In this Great Lakes Theater production of Love’s Labour’s Lost, a play filled with heightened language and topical references, it’s pretty easy for many details of the story to get lost. To remedy that, director Tyne Rafaeli has turned the whole thing into a fairly non-stop game of Chutes and Ladders. And much of it is diverting while not exactly serving the play’s story and theme.

Upon entering the theater, one is confronted with a large library, the towering shelves packed with books and sitting on a patch of Astroturf. The clever scenic design by Kristen Robinson nicely marries the two environments and moods of the play: the strict, by-the-book asceticism of the scholar and the freedom of nature and human impulse.

And it all progresses promisingly as four young men— Ferdinand, King of Navarre and his three attendants—join in a pact to study together for three years and decline the company of females. Of course, that oath lasts as long as it takes the women to show up, in the person of the Princess of France and her lovely retinue. Soon enough, the men are in full rut and eager to chuck the books aside.

This they do with relish, as Rafaeli has them climbing up and sliding down ladders and the bookshelves themselves, with books shoved out and falling to the floor—in the boys’ urgency to get close to one of the women.

Meanwhile the clown Costard (an appealing Juan Rivera Lebron) has been arrested for dallying with a dairy maid named Jaquenetta (an amusingly dour Maggie Kettering), so Constable Anthony Dull puts Costard in the custody of a loud-mouthed Spanish knight, Don Armando, who already has a secret passion for Jaquenetta himself. Why? Because it’s funny and Shakespeare is fishing for laughs, not a rational plot.

Obviously, many complications ensue as the four women tease the men, who have each been captivated by different gals in the Princess’s posse. Towards the end, surprises come fast and furious as the men dress as Russians to court the ladies (apparently a surefire turn-on back in the day), then the ladies disguise themselves to fool the randy dudes, then the simple folk put on a pageant (of course!), and then sobering news is delivered that the King of France is dead. So the Princess and her gals decide to book, telling the guys they should abstain from worldly pleasures for a year and then they’ll come back and leap into their arms.

In this production, only the broad outlines of the story are clearly presented since calisthenics take over the stage. With Rafaeli’s “Laff Factory” meets Benny Hill style of direction, it is devilishly hard to keep track of old Will’s somewhat tortured script.

The actors, who no doubt will be in excellent physical shape after this run, keep up as best they can. In the leading roles, Jonathan Dyrud as the King and Erin Partin as the Princess affect a royal presence while revealing their hidden lust. And Christopher Tocco and Laura Welsh Berg are entirely watchable as their key attendants.

But David Anthony Smith as Don Armando is never able to establish a comical chemistry with Robyn Kerr as Moth, his page boy. And their accents accents don’t help since they are often hard to decipher. Dougfred Miller and M.A. Taylor contribute some chuckles as, respectively, the schoolmaster Holofernes and his wingman Nathaniel. And in a pleasant switch, Tom Ford beautifully underplays his role as Constable Dull and winds up being the funniest one on stage. Go figure.

If you like a lot of activity and some laughs, this version of LLL may feel just right. But don’t expect to be bowled over by the story, since it’s mostly missing in action.

Posted by Christine Howey at 11:34 AM No comments: Links to this post

PREVIEW Here’s A Plum That’s Never Too Ripe—“Behind the Musical: The Fantasticks” 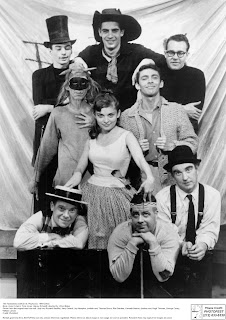 (The original cast of The Fantasticks.)

Try to remember a time when the show The Fantasticks wasn’t around, and you have to go back to before President Kennedy was elected. Weirdly, it almost closed quickly due to tepid reviews and poor ticket sales (the first nine weeks of the run lost $2000, a substantial sum back then). But once it got rolling it became a behemoth, racking up more than 20,000 off-Broadway performances through the years.

Its popularity has never waned due to the memorable songs and the charming story by Harvey Schmidt and Tom Jones—the University of Texas’ gift to musical theater. And soon, you’ll get an up-close look at this musical theater icon the best way possible: at a multimedia concert presented by The Musical Theater Project (TMTP). This is the sixth installment in their “Behind the Musical” series, and it promises to be just as informative and entertaining as all the others.

Co-hosted by TMTP’s artistic director Bill Rudman and associate artistic director/music director Nancy Maier, the two-day, two location show will feature songs from The Fantasticks along with the backstage anecdotes and trivia that only Rudman can provide. There will also be archival footage and interviews to enhance the event.

This concert will feature the singing voices of Shane Patrick O’Neill, Michelle Pauker and George Roth, with Fabio Polanco handling the stellar songs of El Gallo. And it will serve as a nice appetizer for the Great Lakes Theater’s full production of The Fantasticks opening May 13.

“Behind the Musical: The Fantasticks” will be performed Saturday, April 30 at 7 PM at the Stocker Arts Center at Lorain County Community College in Elyria and Sunday, May 1 at 3 PM at Regina Auditorium at Notre Dame College in South Euclid.