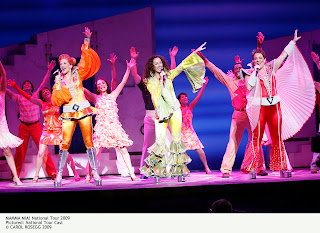 There are some shows that defy critical comment, because the sheer energy of the production and the effusive love coming back from the audience overwhelms rational thought. And sometimes, that’s not all bad.

Mamma Mia! now playing the Palace Theatre at PlayhouseSquare is just such a phenomenon, a musical stitched together around the songs (by Benny Andersson and Bjorn Ulvaeus) ,of the sizzling 1970’s group ABBA. Viewed from one perspective, Mamma Mia! is a cheese-fest of monumental proportions, featuring pop songs and an unbelievable book by Catherine Johnson in a candy-colored setting. Then again, the songs have beats that are as immediately infectious as H1N1, and since the show doesn’t take itself seriously it is virtually immunized against carping words.

20-year-old Sophie is getting married on the idyllic Greek isle where she lives with her ex-rocker mom Donna, who owns a small taverna. But Sophie doesn’t know who her dad is, so she invites three dudes Danna apparently bonked back in the day (thanks to a fast jaunt through mom’s old diary) and they all show up.And the aging boys interact with Donna's old gal pals, Rosie and Tanya, who were once her back-up singers.

This sit-com storyline really only exists to allow the assembled to sing almost a couple dozen ABBA songs such as “Dancing Queen,” “Knowing Me, Knowing You,” and “Take a Chance on Me.” Some of the tunes are integrated well into the proceedings, while others are a forced fit. But most are genuine toe-tappers, accompanied by the low rumbling of audience members who are singing along without missing a beat.

On this opening night, stand-in Rachel Tyler sang the central role of Donna with power, ably supported by Kittra Wynn Coomer as stocky Rosie and stand-in Katy Blake as sexy Tanya. As Sophie, Liana Hunt has a rather fragile and wispy singing voice, even for an ingénue. And her main squeeze ,Sky, was played by yet another stand-in, Bradley Whitfield, a young fellow with a better physique than stage charisma.

But as was said, none of this really matters once the songs start working their insistent magic. And by the time the post-curtain call mini-concert of reprised songs is done, you’ll probably be standing and clapping along with all the other Mamma Mia! acolytes. Don’t fight it; it’s bigger than you. 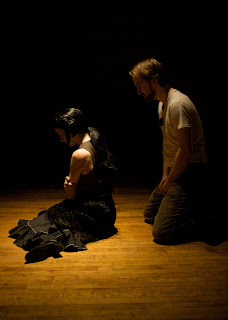 (Emily Pucell as Marie and Sebastian Hawkes Orr as Woyzeck)

The alienation and ultimate destruction of a man who wants to be rational and moral sounds pretty contemporary, especially these days as the tea baggers and birthers shout down anyone who pauses for a moment of actual thought. But Georg Buchner, a German dramatist, got there way back in the 1830’s with his play Woyzeck, a fragmentary and impressionistic tale of, as the Theater Ninjas call it, A Proper Murder.

It’s a devilishly difficult script to bring to life, as it has very few right angles or traditional scenes that come to neat conclusions. This requires the audience to engage the material with an open mind and a sense of adventure. And if you do, you find yourself rewarded by a tight and energetic production under the direction of Jeremy Paul.

Woyzeck (an tortured Sebastian Hawkes Orr) is a barber who is trying to get a grip on his life. But those in the upper classes, such as a Captain and a Doctor (Elaine Feagler and Katelyn Cornelius respectively, who each play additional roles), continually beat Woyzeck down. The play abounds with animal imagery and it often seems that horses are more valued by society than those grubbing about in the lower class, like Woyzeck.

Progressively dehumanized, Woyzeck begins giving in to his hallucinations and snaps when he sees his mistress Marie (a self-loathing Emily Pucell) coming on to a drum major (Val Kozlenko). And that leads to the violent confrontation mentioned above.

While there are some telling lines—Woyzeck in his delusion sees the place where he sliced Marie and says, “Why is that red thread around your neck?”—the power of the play is abstract. And it probably will remain so for many.

This is the kind of play that one wishes was presented as “Rehearsing Woyzeck,” for it would be fascinating to hear director Paul as he guides the actors through this dense work. Failing that, this one-hour production is a dandy workout for your cerebellum, and an early example of the kind of theater that later playwrights would delve into with gusto. 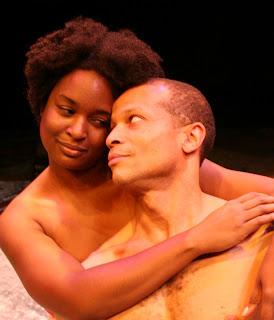 (Kristi Little as Alma and Kyle Primous as Eugene)

As a white rookie teacher in an all-black school in Cleveland, way back in 1968, I was wary about how my skin color would be accepted in my six overcrowded classrooms. But I was shocked to learn that color tensions were readily apparent among the students themselves—with even the smallest hallway dust-ups peppered with barbed taunts about this boy’s blackness or that girl’s fairer skin.

It was surprising that such intra-racial bigotry existed , and many of those jolts are incorporated in Yellowman, now at the Karamu Performing Arts Theatre. Written with poetic precision and an almost primal sensuality by Dael Orlandersmith, this script offers two actors the chance for side-by-side tour-de-force performances. And this Karamu duo, under the tight direction of Fred Sternfeld, accomplishes exactly that.

As we watch Alma and Eugene grow up in a small South Carolina black community, we see how their respective colors and physiques (he’s “high yellow,” she’s darker and a bit hefty) influence their self-perceptions as well as their relationships with family and friends. Alma’s alcoholic mother berates her daughter at every turn, and Eugene develops a festering hatred for his duskier skinned father who seems to despise Eugene for the “pretty” skin tone he inherited from his mother.

Written in alternating monologues with intermittent passages of dialogue, the playwright fashions indelible descriptions of black women working the fields, sweating in the dresses they wear to preserve a shred of femininity. (But the dresses only succeed in making them look larger.) And later, when Alma moves to New York City, she describes how she walks differently in a place filled with new and seductive rhythms spilling out of nightclubs.

Somewhere in the middle of the play, one begins to chafe at the constant references to color—don’t these people have any other conflicts or issues in their life? But then it becomes clear that Orlandersmith is using the repetition as a poet or a jazz musician does, to play variations on a thematic issue that has a powerful and often insurmountable impact on the characters' psyche and outlook. And this is universal, since who among us hasn’t been rendered vulnerable in some way by how we look, and how we are perceived. Using that foundation, the play builds to a shattering conclusion that, while a tad overwrought, has its own undeniable strength.

As Eugene, Kyle Primous is amusingly believable as a goofy grade schooler and compelling as a young man harboring a roiling discontent. Kristi Little brings to Alma a shattering sense of personal emptiness, having been hollowed out by her mother’s constant carping. And together, they leverage each other’s neediness to create a sexual chemistry and a fierce bonding that threatens to torch Richard H. Morris, Jr.’s handsome wooden platform set.

Director Sternfeld, the maestro of the massive musical uber-production, here is working with about 76 fewer actors than usual. But he keeps every beat change razor sharp and brings out poignant dimensions of these two beautifully written characters.

This is a magnificent production, with nary a stick of furniture or a single set change to distract from performances that will stick in your mind for a long time to come.