How His Bride Came to Abraham, None Too Fragile Theater 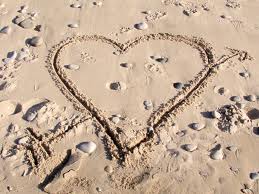 (NTF chooses not to provide production photos of their shows and this blog chooses to place images at the start of each review. So...here's a photo that makes sense, sort of, once you read what follows.)

It’s no revelation that the large religious and cultural divisions in the Middle East always come down to personal stories and individual moments of either beauty or tragedy. But it never hurts to be reminded.

And in How His Bride Came to Abraham by Karen Sunde, now at None Too Fragile Theater in Akron, those hostilities are embodied in two people: a male Israeli soldier and a female Palestinian terrorist. They meet war-cute in the Israeli zone of southern Lebanon.

That obviously sets us up for massive fireworks, but the play slips a gear right at the start. First, Sabra, the young woman is helping Abraham limp into a hiding place she had established earlier. Then, they fight each other. And immediately after that, Sabra is gently tending to Abraham’s injured foot.

These fast switchbacks, within a few minutes, never let the audience fix on the mindsets of these two stressed out young people. And that makes the ensuing dialogue—ranging over all manner of inflicted injuries and atrocities, hopes and dreams—less compelling than it might be if we really understood who these two were from the start.

The complex relationship between the two eventually gets intimate before the inevitable tragedy that ends the talk for good. And there are some telling moments, as when Abraham says, reflecting on his family’s tortured past, “How can I keep death alive inside me?”

Meanwhile, the playwright reaches for political balance, showing how innocent young people are dragged into these conflicts when their individual inclinations might take them somewhere else entirely.

It’s a big task. And while the play does raise important points about the connections these two have with their countries and their families (Abraham’s grandmother’s voice is heard from time to time), the resulting “peaceful” fusion they create feels less monumental than the playwright intends.

As directed by Sean Derry, the two actors handling this ambitious material are starkly believable, even when the scenes are less so. Leighann Niles Delorenzo is wiry and focused as Sabra and Gabriel Riazi matches her intensity while adding a charming layer of naïveté. Grappling with each other on a mound of sandy dirt on the small NTF stage, each turns in an admirable portrayal.

But the oversimplification of what it takes to quell conflicts like these undermines a promising script. If playwright Sunde had not tried to wrap everything up so neatly, the play might resonate more clearly in a world where solutions are sought more than achieved.

The clueless former Senator of Alaska Ted Stevens once described the Internet as “a series of tubes” sending information from one place to another. He was wrong about the Internet, but he may have stumbled on a metaphor that works for Baldwin Wallace University’s musical theater department.

It seems that this program has a series of tubes that sends talented young performers directly to the Broadway stage. And the reason for that is on full display in Follies, the iconic James Goldman and Stephen Sondheim musical now at the Kleist Center on the BW campus.

This haunting play, studded with glorious Sondheim tunes, takes place on an old Broadway stage that’s ready for the wrecking ball. But first, a reunion is held for the old performers, many of whom appear in ghostly forms.

It’s a challenging and daunting work, brought to vibrant life by a huge cast under the direction of Victoria Bussert. When Bussert is on her game, as she is here, there is no one who can stage a production with more grand scope and yet maintain a craftperson’s attention to detail.

The show revolves around two couples whose marriages have faded into irrelevance. Buddy & Sally and Phyllis & Ben are now on in age, lamenting past decisions, infidelities and missed opportunities.

These roles are double cast among BW’s talented students. The older versions of this foursome on the second night of the run—Clare Hoews Eisentrout (Sally), Ciara Renee (Phyllis), Alex Syiek (Ben) and James Penca (Buddy) all performed with clarity and specificity.

The only missing element was the middle age of the characters, inaccessible to these young performers, that informs so much of Sondheim’s lyrics and Goldman’s book. But these remarkable young actors maximize every other aspect of their portrayals. And it’s quite likely that the students who share these characters on other nights do exactly the same.

The sprawling cast also includes several BW faculty members, who turn in sparkling cameos. But the overwhelming impact of this production is often due to the elegant set design by Jeff Herrmann, the sumptuous costumes by Charlotte Yetman and lighting designer Mary Jo Dondlinger’s evocative touches.

This Follies is a feast for the eyes and ears, staged with a gloss and professionalism that few theaters in the region can match. And you can include the touring Broadway shows in that mix.

Posted by Christine Howey at 12:30 PM No comments: Links to this post

Beauty and the Beast, PlayhouseSquare 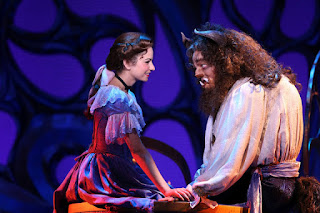 (Hilary Maiberger as Belle and Darick Pead as Beast)

No matter how you do Beauty and the Beast, you’re bound to attract an audience. Especially those height-challenged folks (kids, to you) who are treated to this Disney theatrical production.

And the youngsters won’t be disappointed by this touring show, even though they may squirm a bit as it lumbers along for almost three hours, with intermission.

Adults, however, could find entrancement hard to come by in a production directed with children’s theater broadness by Rob Roth. Indeed, there’s so much mugging going on around him that Darick Pead in his Beast costume seems positively understated.

Fortunately, he and Hilary Maiberger as Belle have ideal voices for these fine songs, and Pead finds some pathos in the Beast who is desperate to find a true love before his hirsute and be-fanged fate is sealed.

Maiberger is less successful in conjuring an interesting personality to go with her sterling pipes. She never quite captures the feisty, eccentric spirit of this girl who is considered a book-reading oddball in her little town.

In the hugely comical role of Gaston, Jeff Brooks has guns that won’t stop and a powerful voice. But he never fully dominates the stage as Gaston should, leaving a hole at the center of the feud that leads to the final confrontation with Beast.

As for the mansion’s servants who are all on their way to becoming household furnishings under the enchantress’s spell, it’s a mixed and mostly ungratifying bunch. Hassan Nazari-Robati exudes plenty of energy as Lumiere, but he lacks variety in his various candle lighting moments, relying on the same grins no matter what the situation.

Mrs. Potts, as portrayed by Erin Edelle, doesn’t offer the ample maternal quality that makes this character memorable, and Edelle’s rendition of the title song is thin and unaffecting. Jessica Lorion tries to have fun with the maid Babette but comes up short, as does an over-the-top Shani Hadjian as Madame de la Grande Bouche.

Instead of playing characters, these actors all seem to be diving for the closest and easiest laugh. And that begins to wear out one’s patience.

As for the set design by Stanley A Meyer, it seems equally overdone, sporting lots of fairy tale book foliage and super-cutesy little cottages. This approach proves distancing, never allowing the audience to fully buy into the story itself.

Even so, much of the Alan Menken/Howard Ashman/Rim Rice music shines through, giving kids and oldsters a familiar rush. With this show, that’s always the beauty part.