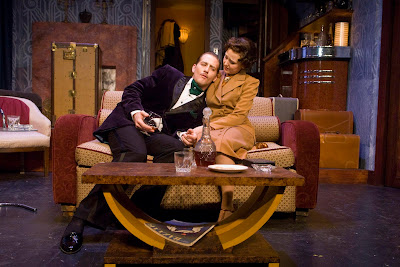 (Dan Hendrock as Garry and Kelli Ruttle as Liz)

If Present Laughter is the last full production to occupy the venerable Brooks Theatre stage at the Cleveland Play House, consider it a blessing. The Brooks’ intimate brick-walled, wood-floored space has been home to countless shows. And this crisp and thoroughly delightful work mounted by the Case Western Reserve University MFA program comes across as a love letter both to the Brooks and to the Play House in general.

The self-deprecatory romp authored by Noel Coward is a heaping serving of luscious, urbane and oh-so-witty dialog. And the young performers from CWRU handle it all with sophistication and dexterity under the finely-tuned direction of Jerrold Scott. Although not perfect (and what, my dears, is?), this is an evening not to be missed by anyone who hungers for something suave without the unpleasant Sheen often evident in our current crass culture.

The play revolves totally around a Coward avatar named Garry Essendrine, a renowned British actor of romantic comedies who has just crossed the 40-year-old threshold. That milestone gives this bountifully theatrical person one more reason to flagrantly lament his cosseted existence and throw fey insults at anything that moves.

And there are plenty of people orbiting around Garry’s self-fueled and, um, flaming sun. His ex-wife Liz (a wonderfully wry Kelli Ruttle) is happy to be living separately but still loves the guy and runs interference for him. And since Garry is planning a six-week tour of Africa, there’s a lot going on.

Some of that activity involves the young actresses who “lose their latchkeys” and wind up at Garry’s door for succor. First, there’s Daphne (Caroline Santa) and later the aggressively amorous Joanna (Eva Gil). Joanna is intimately acquainted with Garry’s professional pals Morris (Yan Tual) and Hugo (Michael Herbert), and they all figure in one of the tangled subplots that send Garry reeling (although it doesn’t take much).

Among Garry’s household staff, Kim Krane as his secretary Monica is a deadpan treat, delivering each of her putdowns with acerbic bite and a nice twist of the knife. And always without ever changing her expression. In a broader bit of buffoonery, Erin Bunting turns the sour Miss Erikson into a chain-smoking apparition who shuffles about in her own cigarette haze.

Although he has few lines, TJ Gainley manages to make Fred the valet a sweet and sympathetic person as he faithfully attends to everyone’s needs. And many laughs are generated by Andrew Gorell who plays an offensive young playwright Roland Maule who won’t take “No!” or “Get out!” as useful directives.

In the key role of Garry, Dan Hendrock is amusing in all the right ways, dropping his character’s acidic bon mots with deft assurance and prowling his environs like a silk-clad jaguar. However, there are moments, particularly in the first act, when he seems trapped into speed-reading some long speeches. These are juicy soliloquies that should be milked rather than rushed.

There’s also a rather sad subtext to Garry’s character that goes largely unexplored: the actor who is so often “on” that he has no way to turn himself off.

That said, this production is delicious—from the lush set designed by Jill Davis to Kristine L. Davies’ elegant costumes. The Brooks is going away, theater lovers, and this show is a very fond and hilarious farewell.

Posted by Christine Howey at 9:33 AM No comments: Links to this post 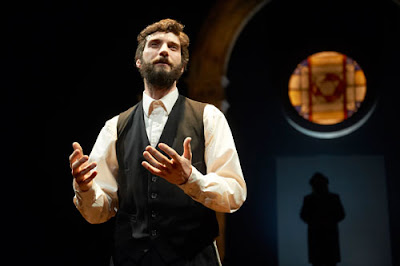 As is true with the production of Congressional laws and sausages, making art—especially challenging and transgressive art—isn’t easy to watch. Feelings can get badly bent when visions of morality, religion and art collide. (Just consider the “piss Christ” brouhaha in 1989.)

The collision of art and religion is the core conflict in My Name Is Asher Lev, now at the Cleveland Play House. Adapted from the eponymous Chaim Potok novel and directed by Laura Kepley, this play has wonderful moments, thanks to three talented actors, when one feels the bone-deep passion of various characters. But the structure of the piece works against a more thorough exploration, leaving the whole entity less than satisfying.

Adaptor Aaron Posner attempts to encapsulate, in 90 minutes, Potok’s themes that also involve artistic honesty, self identity, community acceptance, and religious rigidity. And that’s just the short list. Clearly, no play can cover all that ground in the ways a novel can.

Asher Lev is a young man who, although a self-proclaimed observant Jew, is also a committed visual artist. His desire to capture his world, whether it be the rainy streets of his Brooklyn home or the fire in his father’s eyes, drives him to draw and paint as others are compelled to breathe.

His father is a sophisticated and worldly man who travels often in his work for the local Rebbe, but dad still doesn’t understand the lure of art that grips his son. As for Asher’s mother, she is caught between her two men and tries to placate both.

Posner’s script establishes Asher as the narrator, and while this helps move the play along its back-and-forth timeline, it ends up telling us more than it should. For instance, Asher comes out on stage at the start and pretty much profiles his entire character without allowing the audience the pleasure of discovery. This insistence on over-telling is consistent throughout the show.

Even so, the actors manage to carve out some effective scenes. As Asher, Noel Joseph Allain is focused and a bit monomaniacal in the way great artists are. But the fact that we never see his art, which we are told is superb, leaves something of a vacuum at the center. In a book it’s no big deal, but theater is largely a visual medium.

Tom Alan Robbins plays all the other male roles, crafting a stern but sensible father, a joyful Uncle, and artist Jacob Kahn, a wise mentor to Asher. Kahn spouts profundities about art at regular intervals: “You cannot lie,” “You are only responsible to your art.” These terse teachings lead Asher to the ultimate confrontation with his parents over his masterpiece, the Brooklyn Crucifixions.

Playing all the women, including an art dealer and a nude model, Elizabeth Raetz is more than capable. Unfortunately, she is hampered by the script that mostly gives mom repetitive words to say and not much to do other than a lot of mournful gazing out the window.

Placed in the wonderfully adaptable Baxter Stage space, the spare and clean set design by Antje Ellerman is a model of efficiency as a window, overhead lamps and an artist’s easel appear and disappear smoothly from above and below.

But the entire look of the stage feels too neat and ordered. As Asher says more than once, “The world isn’t pretty,” and that’s how he wants to paint it. Some of that messiness, on stage, would have reflected the tumult in Asher’s mind, as well as the disturbance ignited in his religious community once his art is seen by all.

At the conclusion, Posner finally opts for understatement and it works perfectly. If only he had tried that restraint in the previous 85 minutes.

My Name Is Asher Lev

Posted by Christine Howey at 10:43 AM No comments: Links to this post 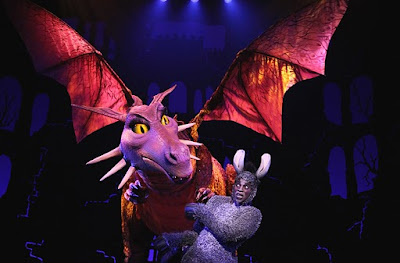 (Alan Mingo, Jr. as the Donkey encounters an amorous dragon)

Usually, if you were to say that there is nothing particularly special about the story, the music, or the performances in a musical, it would be reason enough to scratch that play off your list. But that’s not the case with Shrek The Musical, now at PlayhouseSquare.

Indeed, there are reasons aplenty to grab a ticket to this production, but most of them involve the visual feast that awaits. The Palace Theatre stage is filled with jaw-dropping gorgeous sets, plus a proscenium-long love-sick dragon, operated by four hard-working puppeteers. These elements contribute to whiz-bang staging that overwhelms (in all the best ways) even as it delights.

As for the storyline, it hews closely to the animated movie from which it sprung, along with carefully copied characters down to a faux Eddie Murphy as the wisecracking donkey friend of the ogre Shrek. Not really a Beauty and the Beast rip-off, Shrek is more "Beast and the Beast," as the eternally rejected Shrek finally meets his match in the diurnally lovely (but nocturnally “monstrous”) princess Fiona.

Shrek and Fiona’s love bond is forged in an ogre fart-off that will delight every 11-year-old in the audience, as well as the furtive pre-teens who lurk inside most of the adults in attendance.

Piling on a series of references to other shows (The Lion King among them) and clever cultural tweaks, the book and lyrics by David Lindsay-Abaire generate many smiles and a few guffaws. But the music by Jeanine Tesori never reaches the heights and is instead determinedly workmanlike.

As Shrek, Eric Petersen labors mightily inside the green prosthetic head that he wears, and manages to deliver some well-phrased tunes. But Holly Ann Butler (an understudy) never quite encompasses Fiona’s darker side, an aspect that would give many of her scenes a sharper comic angle.

Alan Mingo, Jr. does an acceptable Murphy as the Donkey, but doesn’t cut loose when the opportunities present themselves. In a similar way, David E.M. Vaughn has fun, on his knees, as the vertically diminutive Lord Farquaad, but again few chances are taken.

Indeed, it seems that the visual grandeur of this show serves to minimize the performers, or perhaps they are restrained by Dreamworks’ corporate guidelines. Whatever the case, the main characters never seem any more developed that the phalanx of storybook characters who are driven from their homes, only to inhabit Shrek’s swamp—much to his dismay.

Still, this is the kind of Broadway extravaganza that can only be seen in this area on the a PlayhouseSquare stage. So if you love eye candy, your truckload of chocolates has just arrived.

Posted by Christine Howey at 12:54 PM No comments: Links to this post