Lord of the Burgeoning Lumber, convergence-continuum 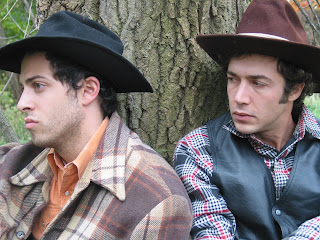 (Tom Kondilas as Spooky and Geoffrey Hoffman as Timothy)

Although it’s about three years behind the gay cowboy curve, thanks to the flick Brokeback Mountain, there are things going on in Lord of the Burgeoning Lumber at convergence-continuum that ol’ Jack and Ennis probably never dreamed of doing.

And just as the title of this play is an elaborate restating of a more simply phrased thought (say, Master of the Hard-on), so this world premiere play by local playwright Tom Hayes is a well-embroidered and often funny meditation on a profoundly basic question: Who am I? And just as importantly: Who the fuck are you?

We find two cowpokes camped out in a forest dominated by one giant oak, but Spooky and Timothy are no ordinary saddle jockeys. For starters, Spooky really doesn’t like his nickname, but he won’t tell Timothy what else to call him. And Timothy likes to commune with the constellations and then adjourn to the tent, emerging a couple minutes later in a variety of guises ranging from a platinum-haired vamp to Little Red Riding Hood with a basketful of hot muffins.

These changes are often instigated by Spooky, who often addresses Tim by saying, “Sister, go put on a dress.” So far so good, gay cowboy-wise. But once the local Ranger stumbles onto the kinky campsite, the proceedings get a bit more complicated as everyone’s real identity flickers in and out of focus like faces around a campfire.

The first two-thirds of Hayes’ 75-minute play is captivating, thanks to his deftly oblique writing style and excellent performances. But in the final third, Hayes unwisely abandons his successful pattern of weird in-the-moment occurrences, especially the appearance of Timothy as a Butterfly Queen (in the person of Megan DePetro) and as Teutonic Helga (Sarah Kunchik). Instead, he sends the Ranger off on a reminiscence about his time in World War II, while the promising play twiddles its thumbs waiting for the real action to restart.

As Timothy, Geoffrey Hoffman is an untrammeled delight as he morphs from one lass to the next, and then conjures up a diffident boy scout to complete his character portfolio. Even though his faux Irish accent as Little Red is (intentionally?) atrocious, and he tends to declaim too reflexively when given strong mini-speeches to deliver, Hoffman captures a telling essence in each of Timothy’s personas. And regardless who they are, each is resolutely attracted to Spooky.

For his part, Spooky, played superbly by Tom Kondilas, is a smoldering hunk who just wants to be left alone with his shape-shifting buddy. And Tyson Douglas Rand is a perfect foil as the Ranger, an ex-soldier who doesn’t get the gay thing and reacts badly when he is bound to the tree wearing a wig and lipstick.

Once again, director Clyde Simon has staged a thoroughly intriguing production using video clips (amusingly so, for Timothy’s costume changes in the tent) and a soundtrack of live and recorded music. But what is most present in this show, as is often the case at convergence-continuum, is a muscular and vivid experience that reaches out to the audience on both intellectual and visceral levels.

Lord of the Burgeoning Lumber
Through December 20, produced by
Convergence-continuum at The Liminis,
2438 Scranton Road, Cleveland,
216-687-0074
Posted by Christine Howey at 1:58 PM