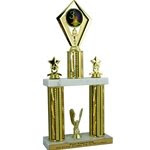 (This handsome, virtual "Best of Cleveland Theater"Award Trophy will look fetching on the winners' virtual mantels.)

Let’s look on the bright side—at least you didn’t have the misfortune to run into Bernie Madoff at a golf outing.

And to make you feel even better…here are Rave and Pan’s "BEST OF CLEVELAND THEATER" AWARDS, for the calendar year 2008.

It was another splendid annum, filled with memorable performances and productions. We can only hope that these theaters will continue to produce such fine work in 2009, as we slide into a daunting economic future that will test everyone’s mettle, perseverance, and bladder control.

So cue the orchestra, and let’s open the envelopes!

This theatrical tour de force, directed with riveting energy and hip-hop choreography by Terrence Spivey, turned Jean Genet’s absurd look at race into an unforgettable evening. Featuring spot-on performances by a talented ensemble, this tone poem was lyrically cruel and tantalizing from start to finish.

Bristling with fierce intelligence, this “race relations” musical by Tony Kushner makes a liar out of anyone who says musicals are air-headed. And thanks to a nearly flawless cast (see Best Actress—Musical) and superb direction (see Director of the Year), this was theater of the kind you dream about: exciting, unpredictable, amusing, and absolutely engrossing.

ACTRESS OF THE YEAR
Laurel Johnson

In the excellent black comedy Freakshow at convergence-continuum, Johnson played the limbless Amalia, a woman who parlayed her shocking physical deformity into a universal truth. And she almost topped herself in Boom at Cleveland Public Theatre, turning a hot-to-trot Jo into a person filled with outrage and a relentless urge to live.

Also, a deep bow to Anne McEvoy who turned in splendid performances in Colder Than Here produced by Dobama as well as in Two Plays by Gao Xingjian and Goldstar, Ohio at Cleveland Public Theatre

ACTOR OF THE YEAR
Robert Hawkes

As Alec in Colder Than Here, by Dobama, Hawkes was the picture of wry frustration as he faced the impending death of his wife. And in Who’s Afraid of Virginia Woolf at Ensemble, Hawkes’ was a put-upon non-entity who ultimately lashed back with quiet and terrifying ferocity.

DIRECTOR OF THE YEAR (tie)
Sarah May and Terri Kent

Following a terrific staging of The History Boys at Beck Center, where she managed to corral a lot of boyish energy, Sarah May hit a grand slam with Caroline, or Change (Dobama/Karamu). Her ability to find the precise dramatic fulcrum of each character, and then stage each production with vitality and imagination, is simply awe-inspiring.

If you want a classic American musical done right, give it to Terri Kent and her team at Porthouse Theatre. Anything Goes was a light diversion made giddily intoxicating by Kent’s direction (and MaryAnn Black’s choreography). And then Kent’s staging of The Music Man featured sweet precision in the group numbers (a great “Rock Island” opener) and sizzling individual performances.

Prowling the stage like a decadent cougar, Dixon was the leader of an acting troupe that created a symphony of voices from the black culture. And Dixon never relented, whether he was talking to other characters on stage or making an audience member cringe. You literally couldn’t pry your eyes from this stellar performance.

Cataan was worth double the price of admission as fragile and naïve Honey, trembling like a leaf in the psychological windstorm generated by George and Martha. By never lapsing into a stereotype, Cataan made this easy-to-dismiss role as funny (not to mention as poignant), as playwright Edward Albee could ever want.

Other fantastic performances were turned in by Dorothy Silver as Violet in “Waiting for the Telegram” in Talking Heads 2 at Beck Center, and by Andrea Belser as Juliette in I Have Before Me a Remarkable Document Given to Me by a Young Lady From Rwanda, produced by Dobama.

As Jules, a nerdy scientist with foreknowledge about the end of the world, Snyder never hit a wrong note. Comedy doesn’t get much blacker than it is in this show, but Snyder seemed perfectly natural as he tried to manipulate a woman he lured to his survival bunker. By turns creepy and oddly sweet, Snyder’s Jules was a revelation.

Sure, it’s technically a musical comedy, but Spence was terrific as Alice the 1950s era TV comedy writer. Combining a comically apt voice with a deadpan visage, Spence nailed her punch lines and stopped the show with her song, “Professional Showbizness Comedy.”

In the dream role of Captain Hook, Mauldin never missed a chance to chew the scenery, and it was hilarious. This sissy-pirate was a hoot as he luxuriated in his pronunciation of every syllable as he haplessly chased Peter, often creating laughs with just a glance or a single sound.

Even though her character could curdle milk at 20 paces, Dooley’s Caroline showed the vulnerable underside of this African-American woman who worked for a southern Jewish family. And when she sang the blues, you felt it down to your shoes.

This show demands a great ensemble performance, and that’s just what Bellamy provided. By paying precise attention to the small beats that create a powerful production, Bellamy brought the audience into the hopeful world of the Younger family, and to a bigoted time in our country that never imagined Barack Obama.

Keeping the pace brisk but never hurried, Wood gave this black Armageddon comedy a rush of laughter that ended in some sober reflections on life. This rather intricate mind game of a play could have come across as pretentious, but it never did thanks to Wood’s light touch and firm control.

This stylish production put its focus where it belonged, thanks to Brault, and as a result it was charming and witty throughout. The story about twins who were separated at birth was larded with melodrama but it played like a dream with Brault’s crisp and purposeful direction.

Sometimes, simpler is better. And sets don’t come much simpler or starker than Sisson’s bare plywood sheets that composed much of the playing area for this show. Almost painful in its rawness, the wood and exposed fluorescent lights were an ideal frame for this classic story of mass hysteria. Visually, it was a production that left splinters in your soul.

Rippling with muscularity and an undimmed rage, this Sam Shepard play didn’t give an inch as it expressed the fury many felt regarding the Bush administration. Director Christopher Johnston ratcheted up the tension, blending Shepard’s black humor with a bleak perspective of the “new” fascism.

Yeah, it’s another gay cowboy story. But in Hayes’ telling the cowboys manage to address some eternal questions about identity while making those meditations ridiculously amusing. Hayes’ oblique writing style kept the audience guessing, and laughing, all the way along.

“Between Life & Death” was a monologue, “The Other Shore” was a dance, of sorts. And each was confounding and compelling in its own way. This was a dazzlingly theatrical evening directed, respectively and brilliantly, by Holly Holsinger and Raymond Bobgan.

This cult film about a May-September affair makes a damn good stage musical, at least when it’s brought to life by director Victoria Bussert. Although lacking the subtext of the Vietnam War, this smoothly professional production was sweet and often hilarious.

Turns out, there really are small roles. But when you bleed them for as much fun as Roth did as
The Old Actor, you kinda wish all roles were this tiny. His dusty and wrinkled thespian made even the simple act of stepping off a stool a moment of comic joy.

Year in and year out, Bredeson-Smith fashions some of the most memorable characters in local theater. But her performance as Judith, caretaker of the limbless Amalia, was something special. Working around a snaggle-tooth oral appliance, she delivered a soul-wrenching monologue detailing her abuse at the hands of her freakshow proprietor. We still have goosebumps.

The visceral reaction generated by this rousing musical was something to behold. Telling the story of the 1960s hit-making machine called the Four Seasons, this production ripped the roof off the State Theatre and had boomers dancing (okay, shifting from foot to foot) in the aisles.

BEST PLAY PRODUCED BY A MUSEUM
The Gamblers, produced by the Cleveland Museum of Art

This one-hour romp of a 19th century play by Nikolai Gogol felt as contemporary as Mamet, due to an excellent adaptation and direction by Massoud Saidpour. The stylized performances fit the material perfectly and the result was a humorous meditation on money-grubbing human beings. And thus, we come back full circle to Bernard Madoff.

CONGRATULATIONS TO ALL! AND HERE’S TO AN EQUALLY GREAT 2009!
Posted by Christine Howey at 3:41 PM