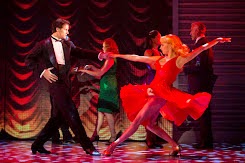 Hey, it happens to the best of us. Eddie Murphy, once one of the most innovative comedians and comic actors, shows up at the SNL anniversary show laminated and almost embalmed inside his own gigantic self-regard. So sad.

The same can be said, in a different way, about Dirty Dancing the musical version of the much-loved flick that is now occupying the Connor Palace stage at PlayhouseSquare. That 1987 low-budget rom-dram won everyone’s hearts (not to mention a couple other boy parts) thanks to the performances by slinky Jennifer Grey as Baby and studly Patrick Swayze as Johnny, her dance instructor at a summer resort in the Catskills in 1963.

The film has some tender and personal moments that feel honest, even with all the dancing exertions. But the this glitzy and glossy stage extravaganza almost suffocates the simple story with an avalanche of big dance numbers and bigger stage effects. The result is a shiny theatrical mechanism without much of a human pulse.

The book by Eleanor Bergstein, a slight adaptation that hews closely to her own film script, is so fragmented and clipped that it’s virtually impossible to connect with the characters. This is true for the two main roles and even more so with the secondary characters, including Baby’s family, Johnny’s regular dance partner Penny (an amazingly lithe Jenny Winton), and assorted resort folks.

Sure, the show reaches for some kind of gravitas by dragging in references to social issues and personal dramas, including a botched abortion. But it all feels tacked on—especially a rendition of “We Shall Overcome” that seems cringe-worthy in this context.

Abandoning the low-budget look, the stage is filled with gigantic visuals as projections of all kinds are thrown onto towering panels while various sections of the panels open and close to reveal an elevated on-stage band, a revolving bed and other gimcracks not found in most Catskills resorts. But what the hell, this is a Broadway-style musical, so let flow the eye candy and back-arching choreography designed by Michele Lynch and Kate Champion.

Trouble is, DD is not exactly a musical in the traditional sense, since the actors don’t always sing the big numbers. Those tasks are often given to two performers, Jennlee Shallow and Doug Carpenter, who each have character names with “singer” appended to them. Usually, this designation isn’t required for musicals. But it’s understandable here, since they frequently just appear and start belting without any apparent connection to the story.

They both are fine, but Ms. Shallow is outstanding, even when singing the abbreviated snatches of songs that are allowed in this production. At times, one wishes that everyone else would just exit stage right and allow her to sing through those songs, and rest of the show for that matter.

But no, there is a love/dance match to fashion between Baby and Johnny. As Baby, Gillian Abbott registers a sweet and shy vibe but she never steams it up enough once she gets her dancin’ mojo working. On this night, Johnny was played by understudy Josh Drake, and while he has a buff bod and dances well, he exudes virtually no charisma in this role that should send hearts aflutter.

Dirty Dancing is a hybrid musical that gives you more than your money’s worth in terms of visual and auditory pizzazz. And, you know, it has the iconic bits: "(I’ve Had) The Time of My Life" and the swan dive lift. But if you’re looking for the unvarnished heart of the original, you can find that on Netflix.

Posted by Christine Howey at 8:59 AM